The Police investigating potential wrongdoing by the press under the aegis of Operation Weeting have turned their attention to the Sunday Mirror, with four arrests being made this morning. Zelo Street had been made aware that some significant names were involved – but won’t be telling how that happened – and so the addition of two and two soon resulted in the answer four. 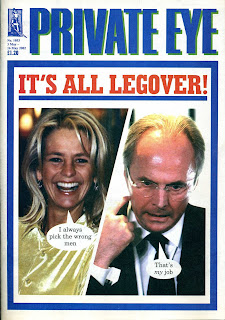 Standing out from the list of arrestees was that one of them was a 47 year old woman. Was it Tina Weaver? Dates were checked out, and yes it was. So the Zelo Street Twitter feed relayed the news. I could not be absolutely sure, but no-one else in a senior role at the Sunday Mirror fitted the description. It had to be her. And so it came to pass that someone agreed with me. 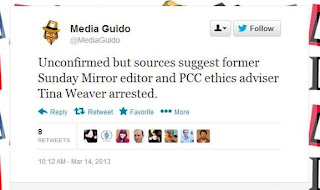 Wonder where they got that?

The Media Guido Twitter feed, part of the empire of the perpetually thirsty Paul Staines at the Guido Fawkes blog, then declared that “Unconfirmed but sources suggest ... Tina Weaver arrested”. This was not a coincidence: Staines’ recently appointed teaboy Alex Wickham follows Zelo Street on Twitter. So that’s another time when The Great Guido has been slow off the mark. 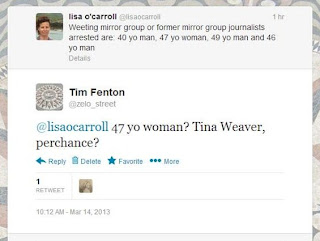 It gets worse: Media Guido then pontificated on a story central to one of the Fawkes blog’s great obsessions, former Daily Mirror editor Piers “Morgan” Moron. “We may yet find out whether [Private Eye] or Guido had the correct version of historic events regarding the Svenn [sic]/Ulrika hacking”. Well, given that The Great Guido made his version up on the fly, that’s doubtful. 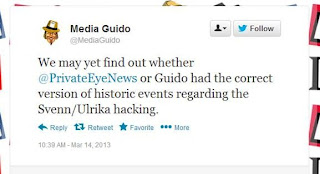 Doubtful, you've been wrong so far ...

The version that Zelo Street has cited in the past, that Sven and Ulrika-ka-ka-ka had both been hacked by the Screws, but two of the paper’s hacks had let slip to someone from the Mirror and this led Moron to call Ulrika’s PR Melanie Cantor and offer a more sympathetic line in exchange for the exclusive, has the benefit of four sources (Eye, Indy, Guardian, Drum). Staines has, er, himself.

... and here's a hint for The Great Guido

Moreover, today’s statement from the Met includes this snippet of information: “It is believed it mainly concerned the Sunday Mirror newspaper and at this stage the primary focus is on the years 2003 and 2004”. The Sven’n’Ulrika story was broken by the Daily Mirror – hence the involvement of Moron – and it happened the year before the focus of the Police probe (2002).

Such is the obsession of the Fawkes rabble with Moron that they cannot discuss Trinity Mirror without trying to implicate him. It’s possible that he will at some future time become the focus of investigations, but right now it’s the wrong paper and the wrong year. So when the Fawkes blog proclaims “you’re either ahead of Guido, or behind”, Zelo Street is very much ahead. Twice over.

All those employees and Staines still gets it wrong. Another fine mess, once again.
Posted by Tim Fenton at 12:57

Police sources confirmed that Sven-Goran Eriksson, the former England football manager, Shobna Gulati, the former Coronation Street actress, Abbie Gibson, the nanny of David and Victoria Beckham, and the former captain of Blackburn Rovers football club had been identified in the preliminary list of potential victims of Mirror Group hacking. Claims for invasion of privacy against Trinity Mirror by Mr Eriksson and the three others were lodged in the High Court last year. Trinity Mirror has applied to strike out the claims.