The relentless demonisation of the NHS by the obedient hackery of the legendarily foul mouthed Paul Dacre continues: today’s Daily Mail front page lead, thundering “Hospital Hired Me To Fiddle Death Figures”, is ample proof of that, if any were needed. But such has been the desire to smear that this supposedly damning article effectively repudiates the Mail’s most repeated statistic. 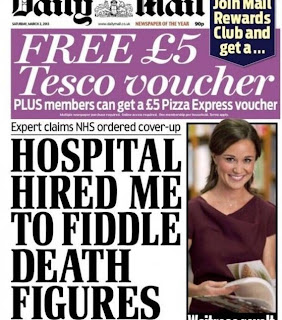 That statistic is about Stafford Hospital, the specific charge being that “as many as 1,200” died there in addition to the number that might be expected in normal circumstances. How does the repudiation take place, when the article is talking of a hospital in Wolverhampton? Ah well. Let’s look at the assertions made by and on behalf of Sandra Haynes Kirkbright.

She was employed by Royal Wolverhampton Hospitals NHS Trust as a coder. This title is important, as will become clear later. She makes adverse claims about patient care, but as she would have been office based and with no patient (or nurse, or doctor, or consultant) contact, it is difficult to know how she could have thus concluded. But she did code patient data.

This would have fed in to the production of what are called Hospital Standardised Mortality Ratios (HSMRs). And it is these numbers that have set off the cheaper end of the Fourth Estate in righteous anger at “as many as 1,200” deaths at Stafford. The Mail claims that Ms Kirkbright was hired explicitly to improve the numbers for the Royal Wolverhampton.

It is important to understand what the HSMR figure means. From the coding(s) inputted, and the actual number of deaths occurring at the hospital, a figure is then output which is meant to show whether there are more or less deaths than the number expected. A score of 100 is “normal”, while one of 110 shows more deaths than might be expected. Lower than 100 means less deaths than expected.

And it’s these scores that have been extrapolated to reach the “as many as 1,200” Stafford figure. Now let’s return to the Mail piece, and especially this snippet: “She claimed they offered to almost double her salary to £54,000 a year to distort mortality figures, mistakenly believing she had been doing the same at her former employer, Stafford”. Yes, Ms Kirkbright had worked at Stafford Hospital.

She had left there in 2011. While at Stafford, she went through patient records from the 2005-2009 period, when there had been no coding manager, to correct incomplete data entry. This is very important: not telling the system how serious a patient’s condition really is means the HSMR number will be higher, and the hospital look worse. The HSMR score after her intervention? It was just 88.

[UPDATE 1745 hours: the Express, to its credit, has followed up the Mail story and revealed that Ms Kirkbright is facing disciplinary action, and that she remains employed by the Royal Wolverhampton Hospitals NHS Trust.

This action follows accusations of bullying, harassment, persistent swearing and unprofessional behaviour (all everyday occurrences at the Daily Mail, of course) made by her colleagues. She was informed in January that she would face a disciplinary hearing. So it seems there are positions being taken prior to that hearing.

What did not raise complaints, however, was her competence in coding patient data in pursuit of generating HSMR scores, and it was this work at Stafford Hospital on patient data from the 2005-2009 period that resulted in the revised HSMR score of 88 - less than the expected number of patient deaths.

Sadly, though, this ability has not transferred itself to Ms Kirkbright's judgment on dealing with the press. It is so often the case that when ordinary people run to the Daily Mail, the paper benefits, but for those individuals, it does not end well. I don't expect her case to be any different]
Posted by Tim Fenton at 12:36