It Was Ten Years Ago Today

A grim anniversary is celebrated today, and that is the passing of a decade since the invasion of Iraq. To illustrate the new and more peaceful state of the country, the eve of that anniversary was marked by a wave of bombings that left 65 people dead. The timing of the attacks was not an accident: someone wants the West to understand that they still have the capacity to carry out such atrocities. 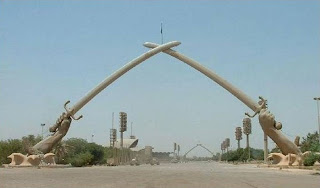 And, as ever, those in favour of the war continue to spin and obfuscate when confronted with the awful facts: over 100,000 Iraqis dead, along with thousands of Coalition troops, and dreadful damage to the country’s infrastructure and economy. Countering this is, inevitably, the argument that the world is a better place as Saddam Hussein has been deposed.

If only that was all the invasion was for. It was not. The Coalition “of the willing”, bullied into participation by “Dubya” Bush, “Dick” Cheney and their neo-con rabble, did not stop at merely removing the Ba’athist leadership: they dismantled the armed forces and civil service, believing that this was a regime like the Third Reich. And the sacked servicemen all kept hold of their guns.

Moreover, some of them clearly knew where the explosives were stored. This, together with an urgent requirement to make a living, resulted in the stuff falling rapidly into the hands of anyone with money and motive. Allied to the collapse in policing and security, and the subsequent ease of movement for whoever wanted to move, this brought carnage on a countrywide scale.

That this would be the result was not, as they say, rocket science. Nor was the pre-war intelligence, some clearly demonstrating, as last night’s BBC Panorama special showed, that the invasion was based on the false premise that Iraq still had chemical, and possibly even nuclear, weapons capability. Instead, inconvenient fact was discarded in pursuit of making the case for war.

But could we have sat it out, with the USA being so committed to action? Well, yes we could, and the Bush administration would have thought no worse of us, had we done so. Some have conveniently forgotten that Harold Wilson (possibly told by Roy Jenkins that we didn’t have the money) kept Britain out of the Vietnam conflict, despite the arm-twisting of Lyndon Johnson, that most persuasive of persuaders.

Yet Tony Blair maintains that he did the right thing, despite the diminution of his political legacy as a result. He and others who supported, and still support, the intervention cannot grasp that Iraq, unlike the Falklands or Kosovo, was never going to be a quick win with a relatively happy ending. Yesterday’s carnage only goes to emphasise the fact.

On the plus side, a future Prime Minister will think twice before any repetition.
Posted by Tim Fenton at 17:57

The one thing I will say in defence of Tony Blair is that I think he genuinely believed removing Saddam by force was the right thing to do. At the time, Sierra Leone and Kosovo had broadly been successes and Afghanistan at least looked like it was going to plan. International law is weak, ineffectual and blatantly shaped by self-interest on all sides, and I can understand why Tony Blair thought it was right to go it alone.

However, that I think was the worst mistake of the whole thing - going it alone without UN support. Once one country unilaterally invades another, no matter how unsavoury the regime, on whatever grounds you choose, what's to stop another country using the same excuse? Certainly that was an easy excuse used by Russia to invade Georgia in a blatant land-grab - I'm not sure Putin would have dared do that without the precedent set by Iraq.

That, I think, is going to be the most far-reaching consequence of the Iraq way. You can argue all day over whether Iraq would be a better or worse place with Saddam still in power, but in the long run, I fear that the breakdown in trust between the USA and the rest of the world will eventually cost a lot more lives. I dread to think what will happen if US intelligence really does find a rogue state with WMDs and no-one believes them.

I wouldn't count on it not happening again.

The media has little interest in self-examination on their WMD failure. Pro-war politicians openly say they wanted to remove Sadamm - not stop WMD, the actual premise.

We only just found out what Nixon did over Vietnam in 1968 - treason. Reagan's legacy is barely impacted by Iran-Contra.