The Curse Of Zelo Strikes

Back in January, a vapid creep called Milo Yiannopoulos ordered one of his unpaid gofers at the Kernel Mag to pen a hatchet job, which was partly directed at this blog. This was a most unwise move: as with the great and good Lord Gnome at Private Eye, such gratuitous and defamatory behaviour can have one consequence, and that is to invoke The Curse Of Zelo. 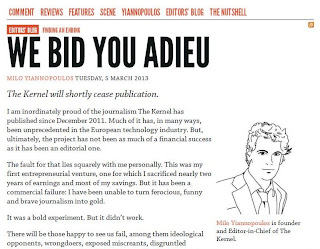 On your way, pretentious meathead

And so it has come to pass: after just 15 months – not two years, as Yiannopoulos claims – the Kernel Mag is to close, as its parent company (sole director being one Milo Yiannopoulos) is unable to pay its debts, notably one of almost £17,000 owed to Jason Hesse, who was its editor for some months. That debt was enforced by the High Court. Others are also owed money.

As the Guardian’s technology editor Charles Arthur has noted, Yiannopoulos is also under investigation by the Information Commissioner’s Office over a paid-for mailing list. There is the potential for a £5,000 fine and a criminal conviction if found guilty, a prospect which would be richly deserved. But if anyone was expecting contrition from this odious individual, they will be disappointed.

Under the suitably pretentious headline “We Bid You Adieu” – adorned with an unduly flattering line drawing of Yiannopoulos, for which I do hope the author insisted on pre-payment in cash – readers (one gives him the benefit of the doubt on use of the plural) are told of “ferocious, funny and brave journalism” generated by this “bold experiment”. He also lays claim to “thousands of subscribers”.

Well, as Charles Arthur has also observed, “thousands of subscribers” would have generated thousands of pounds in monthly income. Yet Yiannopoulos claims to have “sunk about £50,000 into the Kernel so far ... most of which has gone on lawyers”. The thought occurs that if he’d actually stumped up what he owed, when he owed it, the result might just have been a little more favourable.

And if there was any significant income, the thought also occurs that there should be significant assets within the company to pay its creditors. The accounts of Sentinel Media, Yiannopoulos’ company, will make for interesting reading – when they are eventually released. In the meantime, anyone doing business with him should know they can’t trust the SOB any further than they can chuck him.

Talking of which, what happened to Jeremy Wilson, who wrote the hatchet job which brought The Curse Of Zelo down on the Kernel Mag? So much for the brave new digital frontier: Wilson has fetched up at Telegraph Blogs, realising sensibly that these old media dinosaurs at least pony up the jam before tomorrow.

As for Milo Yiannopoulos, he’s set to become the tech sector’s equivalent of Siberia: everyone knows where it is, but nobody wants to go there. Adieu indeed.
Posted by Tim Fenton at 17:28