On the eve of elections to the City of London Corporation – held yesterday – the Evening Standard’s Ross Lydall penned “Dirty tricks claims as Right-wing Tories attempt City of London coup”. The one name in Lydall’s frame was Mark Clarke, who will be familiar to Zelo Street readers as the CEO of the Trade Union Reform Campaign (TURC) which seeks to attack and diminish Trades Unions. 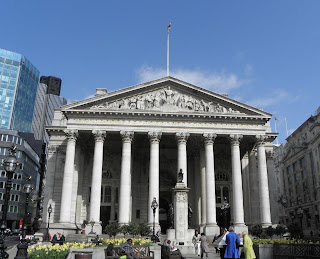 Clarke was a sitting member for the ward of Farringdon Within, his earlier election being cheered on by the usual suspects on the right. And this time he was joined in his re-election endeavour by a support cast of like minded folks: for instance Donal Blaney, CEO of the Young Britons’ Foundation (YBF), the self-styled “Conservative Madrasa”, who stood in Langbourn ward.

But the main thrust of the group was in the Cheap ward (no sniggering at the back, please), where Andre Walker, forced to leave his publicly funded job after being caught plotting a smear campaign against a senior official, stood. Walker was accompanied here by India Brummitt, who has worked for tainted Tory MP Aidan Burley, and former hack Donata Huggins.

This trio proclaimed that they were “standing up for the city”. They talked of their deep affection for, and attachment to, the City of London. They ran a website called cheapward.com, which suggests a legitimacy they did not in fact possess. They posed in front of a blaze of Union and St George’s flags. Their Twitter feed urged voters to get out there and cast their ballots.

And they lost. In a field of six, and with three seats up for grabs, they did not manage to secure one of them. Walker, most satisfyingly, came last. Things did not go any better in Langbourn Ward, where Blaney came second last in a field of seven candidates. But the icing on the cake came in Farringdon Within, where star turn Mark Clarke was deposed.

There were ten candidates for eight seats, and Clarke managed to be one of the losers. So the “Conservative Madrasa”, TURC and its hangers on came away almost empty handed on a turf which should have been ideal for them: relatively small electorate, inherently conservative, and just a little selfish. But the City of London’s voters were having none of it.

The results, to no surprise at all, have not been proclaimed at ConservativeHome or the Guido Fawkes blog. Nor is there any sign of them at the YBF website. What a surprise. What a relief. What a complete and absolute shower.

Back to the drawing board, eh, chaps?

[UPDATE 1750 hours: Ross Lydall has now written about the results on his Standard blog, noting the losses and confirming that the YBF is, in effect, behind this slate of candidates. What he has also told is that "Today there are rumours that one elected candidate supplied incorrect details in his nomination papers. If proved, this could result in disqualification".

Whether this is one of the YBF mob - Alex Deane was re-elected and his pal Adam Richardson also gained a seat - is not told (Daniel Hamilton and Greg Lawrence were two further losers). Lydall suggested on Twitter that there was more to tell about the whole business, and I look forward to yet more excellent spectator sport at the expense of the rabid right]
Posted by Tim Fenton at 10:21