Amber Rudd Isn’t A Racist BUT

Are we re-playing the North Minhead by-election? Is someone re-running episodes of Love Thy Neighbour? Perhaps someone took Royston Vasey a little too seriously? Whichever, the descent by Home Secretary Amber Rudd into a state which is not unadjacent to full-blown xenophobia and bigotry is as real as it is disturbing - unless, of course, you take the press on trust, in which case it is mere Patriotism. 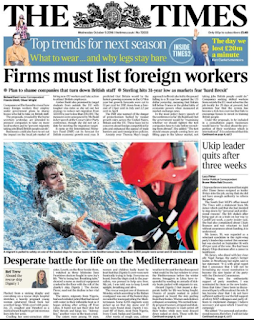 Back in 2007, Pa Broon was roundly ridiculed by not only the press, but many in his own party, when he said “British jobs for British workers”. It was a phrase used by the sneering Pundit Establishment to beat him, and Labour, with for years afterwards. Now, when Ms Rudd says the same thing, she is cheered to the rafters. And the cheering continues when she veers across the racism line, because, remember, this is mere Patriotism.

Thus we see the Murdoch Sun triumphantly announcing “JOBS FOR BRITS British businesses will be ‘named and shamed’ into hiring more UK staff under radical Home Office proposals … Companies will be forced to publish the number of migrants they employ as Amber Rudd attacked the use of cheap foreign labour”. This, though, has nothing to do with the European Union. 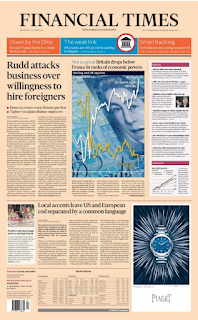 We know this because the article then tells “she revealed they could be required to publish the proportion of ‘international’ staff in the workplace as part of a new crackdown on immigration from outside the EU”. Perhaps those workers will have to display some kind of identifying mark, just for clarity, you understand. The Mail also got the memo.

“She announced plans to crack down on the 'generous' arrangements for students from abroad, saying they could be blocked from jobs if courses are not high enough quality.
Immigration checks will also be mandatory for taxi drivers, while landlords who rent to illegals could face jail sentences … New measures forcing companies to reveal how many 'international' staff they employ will effectively name and shame firms which bring in foreigners rather than invest in talent at home”. 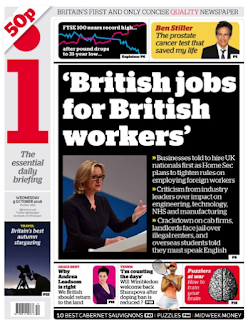 “International”. It used to be such a glamorous word, but now it’s been appropriated to mean code for grubby and casual racism. Welcoming those from outside the UK is going to be reduced to demanding that they speak English. And a hint that the Tories are intent on amending the 2010 Equality Act - after all, discriminating against foreign workers would be in breach of it. And that is what Ms Rudd is suggesting.

“Businesses told to hire UK nationals first”. Just think how outraged the press would be if that practice was employed by firms in other countries, to the disadvantage of Brits. And “Firms must list foreign workers”. Do they get “named and shamed” as well? Where does Ms Rudd expect this to end, once she scratches that racist itch that she doesn’t really have, honestly? Hasn’t she overseen enough hate crime since the referendum?

Amber Rudd may not be a racist. But she does a frighteningly good impression of one.
Posted by Tim Fenton at 10:08

And the effect of this (beyond fuelling general xenophobia) will be to force more and more people into the black economy.

See, most 'illegals' aren't off the back of a lorry. For the most part they came to the UK on a legitimate visa, settled here, and then stayed. And the visa expired.

Now, put yourself in the shoes of a landlord or employer. You've got a good employee/tenant. Shows up regularly, does a good job, pays bills on time. But they're an 'illegal'. Now, you could declare them, and lose a good employee/tenant, and have to find a new one (and risk prosecution); or you could move them off the books (which also saves you some of that red tape hassle like NI contributions or fire regs).

Bit of a lose/lose situation all round.

"one business she knew of where 80% of whose staff were from outside the UK."

I'd rather she work with this one business to find out why this may be.

Tim Fenton is wrong on why the change in response to the slogan "British jobs for British workers".

It is because in 2007 when Brown made his stupid move there was uncontrolled migration from the EU. Hence the need for Brown to outflank Cameron.

Now we are about to embark on leaving the EU and so this slogan now means what it says.

"We know this because the article then tells “she revealed they could be required to publish the proportion of ‘international’ staff in the workplace as part of a new crackdown on immigration from outside the EU”. Perhaps those workers will have to display some kind of identifying mark, just for clarity, you understand."

There's an appropriate symbol on the EU flag.

@ The Professor: "Simple Really"! You are obviously describing the state of what passes for your mind with that phrase. Your "professor-ship" is obviously not one in history, because if it was you would realise the dangers of the true nature of your thoughts which you are desperately trying to hide behind the cloak of this supposed "patriotism". You might start with Germany in the 1930's for your studies, but if you have the mental capacity to extend them further you will find that throughout history there is no example of a country that has retreated into this false "patriotism" where it has actually ended well for that country or for the countries around it!!