Of all the certainties in the media world, few are as reliable as the adoration shown by pompous pundit Simon Heffer for the memory of one John Enoch Powell, the disgraced former Tory minister who gave the world a text-book example of his own claim that “all political lives end in failure”. His ended prematurely in 1968 after Sailor Heath sacked him from the shadow cabinet for his infamous “Rivers of Blood” speech. 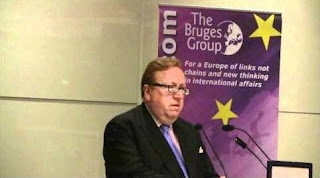 Powell’s reputation has never recovered - except in the world of the Hefferlump, who never wastes an opportunity to tell the world that Enoch Was Right. Now at the Telegraph, perhaps the only paper desperate enough to entertain this supremely washed-up has-been, Heffer has now decided to bestow the highest honour he knows on new Prime Minister Theresa May - he has compared her favourably to Powell.

Except that you will no longer see this paean of praise at the Tel’s website, as it has been pulled, replaced by a yet more desperate rant titled “The City traders betting against the Pound are ignorant teenagers without the foggiest idea what Brexit means”. He has forgotten what Mrs T said - you can’t buck the market.

So why should Heffer’s comparison of Ms May and Enoch Powell have proved too much for the Tel? “Theresa May is following Enoch Powell - by actually listening to what British people want”, its title, gives a clue. Powell claimed he had listened to his constituents before making his incendiary speech all those years ago, but it turned out that much of it was invention. It is not the kind of comparison any modern politician would enjoy.

Heffer also quotes from Powell’s 1968 speech, an act which was also inadvisable, as is language like “Heath’s ill-fated project to take Britain into what was then called the Common Market, which Powell saw as an outrageous sacrifice of British sovereignty, the end not just of our nationhood but of the right of the British government to do what its electorate wanted”. Membership of the EU has not ended our nationhood, nor the right of the Government to do as its electorate wants. Still, details, eh?

It gets worse: “When [Ms May] told some of her colleagues, and their tame pundits in the media, to stop whining about Brexit and instead to respect the votes of more than 17 million people who had found the EU unpalatable, she made a profoundly Powellite point. She accused such people of sneering at the majority who voted in the referendum”. Powell never, but never, accused his colleagues of sneering at the voters.

And Heffer’s recollection is seriously faulty, as witness “during the Thatcher government, when it sought to return power from the all-knowing state to the individual”. Mrs T’s time was marked by a centralising of power unmatched before or since. And worse: “Those who for decades have wanted to leave the EU went to one general election after another feeling utterly disfranchised”. They were in a minority until recently.

Moreover, the idea that free movement of people means “open borders” which Heffer claims “made us vulnerable to crime and terrorism” is scaremongering guff. But perhaps the last straw was “It is why Donald Trump stands such a good chance of winning the American presidential election next month”. He’ll be lucky to stay on the ballot after the latest revelations. Simon Heffer - so useless they had to spike his column.

[UPDATE 1310 hours: the Tel has now put the column back online, but with a time stamp suggesting that it was first published today - which it most certainly was not.

So why do that, after first spiking the piece? Simples. The Telegraph is desperate for clicks, and as the Heffer column has already generated significant comment, the Tel would rather have some of those clicks, rather than missing out.

That the article is attempting to minimise or otherwise justify Enoch Powell's race-baiting and indeed downright racist bigotry is clearly no barrier to clickbait. That's the reality at this former paper of record]
Posted by Tim Fenton at 10:49

I always been leary about Heffer since he claimed authorship of "Essex Man" from the 1979 Election.

Refer to the Financial Times item on the October 1974 Labour candidate in Havering-Upminster. There is a clear mention of "Upminster Man". And Upminster is the outer fringe of ... metropolitan Essex. To extend the conventional bon-mot about Dagenham, Upminster is a full eight stops beyond merely Barking.

"She accused such people of sneering at the majority who voted in the referendum."

Perhaps she, and many others in today's febrile political climate, should remember another, sometime Tory sometime Liberal, politician's words.

“Everyone is in favor of free speech. Hardly a day passes without its being extolled, but some people's idea of it is that they are free to say what they like, but if anyone else says anything back, that is an outrage.”

By all means diss the ideas but don't shout them down.

"What I can’t understand is what the scribblers think a “hard Brexit” is. Do they seriously believe that Europe, with its £69bn annual trade surplus with us, intends to make trade harder?"
The UK doesn't grow nearly enough food to feed itself, or build enough cars for its needs. Yet Brexiters that having to import so much puts us at an advantage.

"but with a time stamp suggesting that it was first published today - which it most certainly was not."
Indeed not. The idiots have forgotten to change the date stamp in the URL.

I still have the 'pulled' version up on screen as a Google cache. I took a screenshot too.