Among the Murdoch goons at the Super Soaraway Currant Bun, none is more innocuous in her appearance and demeanour than Jane Moore. She plays the role of the harmless yet genuinely sympathetic and concerned ordinary member of the public to the proverbial T. But the reality is rather different: Ms Moore is no less an obedient Murdoch enforcer than the McFilths, Kavanaghs, Liddles, and of course singular Parsons. 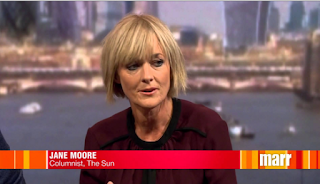 To this end she has penned “Britain’s schools, trains and hospitals are full… where can we put Calais Jungle migrant ‘kids’?” They’re not really kids, you see - orders from the thirteenth floor. This is followed by another whopper as she tells “'Come one, come all' is not a helpful policy when there's overcrowding in all of our public services”. There is no such policy, but orders once more - there are Sun readers to frighten.

Ms Moore tries to suggest that, as London’s Underground gets horrendously busy at peak times - tell me about it - this means the country is full, but goes wrong at the start: “IN all the years I did the daily commute on the London Underground, I would feel disgruntled if I had to stand for more than a few stops”. Must have been a bloody long time ago, says a Northern Line commuter from more than fifteen years back.

Readers also have NHS financial constraints - down to the Government - blamed on all those hordes of mythical people who don’t speak English, and are told of school rolls being over-subscribed. Ms Moore signs off with the mild exaggeration “unless we’re planning to build hundreds of skyscrapers on Exmoor, the Highlands or the Yorkshire Dales, then just where are we going to put them all?” So let me show her the reality.

Let’s wait for a relatively quiet time of day - mid-morning, for instance - and mosey over to London’s Euston station. There, we join a Virgin Trains Pendolino service for the North West. As we reserved seats, there is no problem sitting and watching the countryside speed past, and soon after passing Watford Junction, countryside is what it is. Mile after mile of predominantly open countryside. Open fields. Trees. And few people.

Berkhampstead flashes by, the ruins on the right, the town on the left. Tring is little more than a park and ride station for its immediate area, and a place for commuter trains to turn back and head to London once more. Milton Keynes is the one city among all that countryside. There are few stations, because there are few people living in those parts of the country. Rugby comes and goes. Nuneaton. Tamworth. Lichfield.

Stafford takes a little longer as the train has to slow for a sharp curve. And then, after 20 or so more miles of open countryside, we reach Crewe. Where there is recent eastern European immigration, but no crisis in school places. We have travelled 158 miles, and around 125 of those have been through parts of the country that are not built up. Most of that built up area is the first 20 or so miles out of Euston.

Jane Moore is not only out of touch with Tube commuting, she’s plain flat wrong about how full the country is, and that’s without going near “Exmoor, the Highlands or the Yorkshire Dales”. The reality outside London is that, as in Crewe, if we didn’t have the EU migrants that her paper keeps ranting about, we’d just have more empty shops.

And her shitty paper would have to find someone else to moan about.
Posted by Tim Fenton at 12:16

It is highly misleading, according to the only study of its kind, 7% of the UK is considered "urban", half of which is greenspace, 15% is domestic gardens, 7% rivers etc.bringing the total area of UK that has been built upon to just over 2%. Full? Not even close.
Source http://www.bbc.com/news/uk-18623096
http://uknea.unep-wcmc.org/Resources/tabid/82/Default.aspx

Actually there is a bit of crisis on Crewe school places but not of the sort under discussion. Our crisis is that many British parents in Crewe prefer to place their kids at schools in Nantwich or Sandbach with better street cred (or more accurately golf club cred). So places provided in Crewe are not used as originally intended and had it not been for the influx 10 years ago we would have been looking at headlines about schools being closed! Meanwhile many Crewe kids are waiting for school buses at around 07:00 on cold wet mornings when their east european neighbours are setting off on foot over an hour later. Still if the posh people speak to you at President's evening at the gold club it must be worth it......

She should try the vast open expanses of Cumbria and Northumberland. Then there's Scotland, Wales...

We can't put people on the Yorkshire Dales - they might get in the way of Gina Rinehart's potash mines.