Tony Blair did not just take us into the Iraq adventure - although far too many in his party have difficulty seeing past that. He turned Prime Minister’s Questions into a once a week show (it had been half the length, and twice a week, before), and, as we have seen again today, began the practice of announcing legislation in the newspaper of his choice. Theresa May has merely continued that practice. 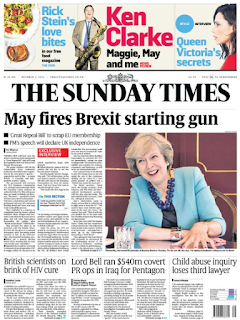 So it is that the Murdoch Sunday Times, and Sun On Sunday, both have supposedly exclusive interviews with the new (and not unelected, honestly) Prime Minister in which she makes the announcement that there will be a Great Repeal Bill. This will mean that Brexit really does mean Brexit, although what else Brexit means, she isn’t going to tell us.

Tim Shipman of the ST and David Wooding of the Sun were clearly happy with their work, or rather they will have been until the questions began to be asked. The idea that a Brexit starting gun had been fired was over-egging the pudding a little, as the promised bill will not be introduced until the next session of Parliament, which means it will follow the Queen’s Speech in March next year. Bit of a slow starting gun, then. 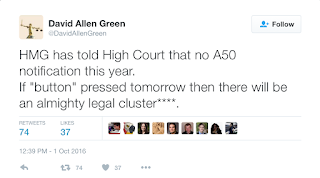 In any case, as David Allen Green has already pointed out, the Government had already told the High Court that Article 50 of the Lisbon Treaty would not be triggered this year. And as Hugo Rifkind has added, “The Great Repeal Bill is nonsense. It just says we'll do what we've already decided to do, eventually, one we've figured out how to do it”. All the stuff about “declaring independence” is just so much froth.

What has not been told is the effect of the bill, and triggering Article 50, on such non-trivial existing legislation like the 1707 Act Of Union between England and Scotland, and how any part of the proposed law is going to get past the Scottish Parliament and other devolved bodies where the Tories are not going to be able to muster the votes to get it through. But we do get a recipe for jam scones. 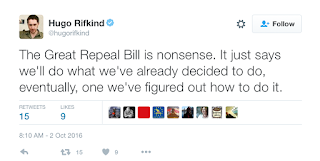 Worse for the Murdoch doggies who must have thought they had scooped the rest of the media pack, Ms May went on The Andy Marr Show (tm) this morning and during the customary inquisition by the host gave the BBC audience the real scoop - that the Government intended to trigger Article 50 by the end of March next year. So the deed will be done sometime between January and March 2017. Perhaps.

Article 50 is the really important one: all talk of repeal bills is otherwise irrelevant. And it gets yet worse: the PM was typically evasive when Marr challenged her on the Single Market, as on so much else. The supposed “starting gun” appears to contain only blanks, with the whole exercise nothing more than a way to enable the PM to momentarily head off the “Hard Brexit” mob and get herself a reasonably pain-free conference.

Theresa May is fortunate that Labour appears incapable of taking these all too visible conclusions and going on the attack with them. That has to change, Jezza fans.

[UPDATE 1810 hours: Theresa May has now addressed the Tory faithful and has made it clear that her vision is to take Britain out of the Single Market.

The effect on our exports would be generally similar to that of Winston Churchill's ill-advised return of Sterling to the Gold Standard in 1925: it will make them more expensive and drive many customers to seek better value elsewhere.

As to the currency, that will probably be under pressure from the word go tomorrow morning, as will share prices.

But Ms May got a rapturous reception in the conference hall, and we're going to have British labelling on British foods, so that's all right, then]
Posted by Tim Fenton at 11:06

As a 'Jezza fan' I'd agree. Create a Shadow Cabinet Brexit Sec role and get Chuka in to serve the party rather than his own ego. He can leave the immigration stuff behind, mind.

Mr Corbyn gives every impression of not caring for the EU and being quite happy that we are leaving. Even if the Labour Party muster an effective Cabinet again there is no reason to expect a hard challenge on Brexit matters, as I think he would be quite happy with a full withdrawal.

It's all a bit like playing chess blindfolded not realising that all the pieces have been removed from the board.

Really, really relished Bernard Jenkin MP given scope for "Commentary" in today's Observer. That's "given" in the same sense as "enough rope to hand himself".

For those absent from this ato-erotic asphyxiation, there's this:
"We need to be aware that Article 50, as intended, could tie us up in knots. Nobody can guarantee that there will be an acceptable agreement at the end of the process anyway. So we must be prepared to leave without any formal agreement if necessary, or the commission has us over a barrel. Leaving without a formal withdrawal agreement would be messy, but a messy Brexit is what many have suggested that the commission and much of the EU would like. Still, a speedy and decisive resolution would be far more acceptable to business than years and years of uncertainty and then a 'fudge' ..."

Here am I pondering how that (and no freedom of movement) would work on the presently-open border between Northern Ireland and the Republic.

Let we forget, back in 1987, Jenkin stood in Glasgow Central to "illustrate that people in the South-East haven't forgotten about Scotland". That went well: a swing against him of 6%, and just 51.5% behind the elected Bob McTaggart. Clearly, "people in the South-East" (especially Harwich and North Essex) have forgotten Churchill's "dreary steeples" of Fermanagh and Tyrone. Absit omen.