Some in the media have in the past taken great exception to my characterisation of Murdoch droid Tim Montgomerie as serially clueless: I am reminded that he is the friend of many of them, that I should not be so presumptuous, that he really does know what he’s talking about, and no doubt before long I will discover that he ranks as high as any in Rome. But there is a very good reason for my scepticism. 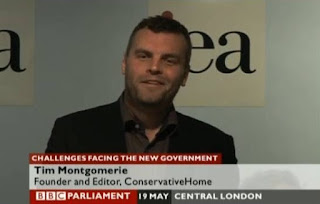 And that is because Monty really is serially clueless, as anyone who recalls his monstrous mis-reading of the phone hacking scandal will already know. The Guardian still has available online “This is about revenge, not phone taps”, an article which is subtitled “The attack on Andy Coulson is politcally motivated: a desperate bid by Labour to get payback for the ousting of Damian McBride”. How wrong can you get?

There were further gems where that came from, such as “the antagonism towards Coulson is also rooted in the hostility of the Guardian and the BBC to Rupert Murdoch's media empire” and “Rupert Murdoch has been an overwhelming force for good in this country's life and politics”. On Coulson, he concluded that “There'll be even more relief that it has blown over so very quickly”. Monty hasn’t improved over the intervening years.

We could see that today when he was, once more, invited to pontificate as part of the paper review panel on The Andy Marr Show (tm). Here, Montgomerie sought to excuse last week’s slide in Sterling by telling how it was no big deal and the currency was overvalued anyway. This is the new Conventional Wisdom of the Pundit Establishment. It is also an excellent example of Monty’s flexibility of opinion.

Because The Great Man has not been so relaxed about threats to the stability of the currency in the past, as witness “Wow. @YvetteCooperMP socking it to Corbyn on his QE nonsense”. That “QE nonsense” was held to be bad for the value of Sterling. Then there was “Not one big new idea in Corbyn's speech. All rehashed 1980s tax, tax, tax and spend, spend, spend”. Keep an eye on the economy - and the currency. 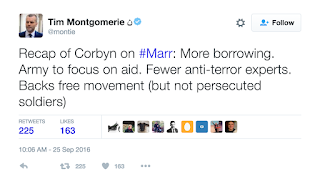 On it went, with Monty trying to compare Jezza to Trump. “We can add Nato scepticism to list of Trump/Corbyn policy overlaps. Others: Free Trade. Brexit. Iraq. Public debt”. Debt - can’t have that, it’s bad for the currency. And there was more from just two weeks ago - “Recap of Corbyn on #Marr: More borrowing. Army to focus on aid. Fewer anti-terror experts. Backs free movement (but not persecuted soldiers)”.

Don’t endanger the currency (but feel free to flout international law). There was even the opportunity to really let the cat out of the bag with “by mentioning Sterling are you preparing the way for a barb about the weakness of the pound?” But the Pound was now held to have been not weak at all. Roy Greenslade got one thing right about Montgomerie - “isn’t his fame all smoke and mirrors”? And yes, that is all it is.

But still Monty is humoured as part of the Pundit Establishment. That tells you all you need to know about the incestuous and defensive behaviour of our media class.
Posted by Tim Fenton at 14:17

As for the pound having been over valued before who's to say it isn't still under/overvalued?

Just as well the Tories don't believe in market forcces isn't it?

At least Steph Flanders was on Andrew Marr and explained to someone hard of the understanding that the huge falls in sterling now mean increases in the price of imported goods. I'm sure he will argue that the goods were too cheap anyway.