Amidst all the faux euphoria surrounding the Tory Party conference, and the press incessantly talking up the idea of Britain leaving the EU, few appear to have noticed the concerns of one part of our economy that is usually at the very forefront of their thoughts - the City Of London, or the financial services industry more generally. This generates £65 billion a year for the Government. It is not a trivial sum. 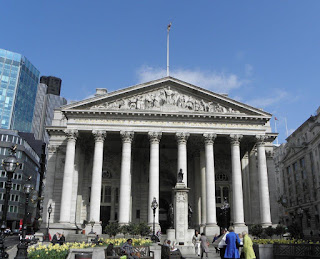 This sector of the economy generates almost 12% of economic output and 1.1 million jobs. It will support millions more jobs across the country. So it might be thought that it would be of prime concern to the Government to act to protect it from those who would prefer that parts of it decamp to Frankfurt, Paris and Madrid. But, as has been discovered, Theresa May appears unconcerned about the fate of the City after Brexit.

As Bloomberg has told, “British financial-services companies will get no special favors in Brexit negotiations from Prime Minister Theresa May, who wants to change the relationship between the government and the City of London … According to three senior figures in May’s administration, the government will refuse to prioritize the protection of the sector after the U.K. has left the European Union. Her team has also dismissed the key business demand for an interim deal with the EU to help ease the transition out of the bloc, one of the people said”. And Tory MPs are making light of the industry’s concerns.

City AM has reported “Speaking at the Conservative party conference in Birmingham, Leave campaigner Dominic Raab played down the importance of passporting, arguing that several alternative models would allow UK-based institutions to access the market, and allow for the City of London to retain its strength … ‘We could have a deal with is based on equivalence of regulation,’ Raab said, adding that regardless of the nature of a deal, ‘I don’t see a cliff edge for the City. I think it will stay the global leader’”.

That was not how a senior man from Citi saw it “James Bardrick, head of Citi UK, responded that uncertainty around the future is harming financial institutions while they wait for more information on the likely shape of access to European markets”. Passporting allows British firms to trade financial services across the European Economic Area.

And, as the Bloomberg article stresses, “While it’s possible the government may be bluffing ahead of the Brexit negotiations to come, any attempt to keep the City at arms length risks alienating a core driver of the U.K. economy at a time of heightened uncertainty. Banks including JPMorgan Chase & Co. and UBS Group AG have warned they will move jobs abroad if the Brexit negotiations threaten to hurt their businesses”.

Politicians like Raab - Howard Flight is another peddling the idea - airily telling that banks will not need passporting, instead relying on “equivalence of regulation”, does not cut the mustard when it comes to giving reassurance. All kinds of things could be possible. But an industry that yields tens of billions in tax revenue needs to also deal in certainties.

If the Tories aren’t interested in protecting the City, but those on mainland Europe are, then it does not take the application of rocket science to see what not merely could happen, but what will happen after Brexit, with the certainty of night following day.
Posted by Tim Fenton at 10:31

It can hardly have escaped their notice that Passporting has been getting an awful lot of column inches lately.

And none of those inches I've seen had mention of 'several alternative models'.

Perhaps Raab and his kind would care to put a figure on how many job losses it takes before a cliff gets an edge.

Big news, if true. Points to a very real division at the heart of Conservatism. Note the distaste Messrs Hitchens, Oborne, Jenkins and Heffer have for the new carpetbaggers. The Cameron/Osborne wing, however won't like this one bit. There will be attempts to remove her from office should she maintain her froideur: lets remember who funds the Tory Party these days.

It’s kind of scary to think that our best hope for avoiding a national catastrophe lies with the people who helped trigger the global financial crisis, but since they hold the Tory purse strings, they might have more leverage than:

a. Either part of Labour party that (the bit thought that unseating the current leader was a higher priority than attacking a government that’s just triggered Britain’s biggest peace time crisis in living memory, or the leader who’s just seen off the rebels but doesn’t seem to have grasped the urgent need to get this Brexit nonsense kicked into the long grass before it does irreparable harm to the sort of people Labour was created to represent).

b. The Lib Dems Europhiles (I expect they’ll be every bit as effective at mitigating the effects of Brexit as they were at abolishing tuition fees and first past the post).

If the City was to use its influence to sabotage Bexit, there would at least be a certain pleasing symmetry to a sequence of events that started with a wide boy from the City (Farage) and was ended by his peers.

On balance, I think the City, followed by the SNP, followed by the sheer incompetence of the people tasked with delivering Brexit are our best hopes for killing this insane project, but right now I’m not particularly confident that Britain will somehow fail to shoot itself in the head, having elected to play this crazy game of Russian Roulette.

City AM is a crap rag.

City donors to the Tories have been making clear their displeasure, both in public and private, re passporting. The chief negotiator the PM will be in no doubt what will happen to the Tories income stream if she fails.