Zelo Street regulars may remember a post covering a campaign of stalking and harassment by an anonymous saddo who sent me letters which claimed to be from the mythical “Blog Complaints Commission”. There were three of these missives over time, each in response to my passing adverse comment on the outpourings of the perpetually thirsty Paul Staines and his rabble at the Guido Fawkes blog. 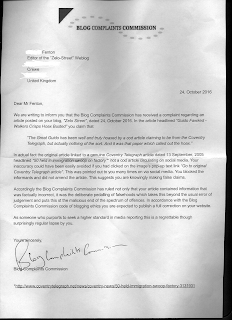 All had been signed by hand, with the first two also addressed by hand. All had been posted in central London. Well, now the “Blog Complaints Commission” is back, sending another anonymous and malicious letter which, as with the others, has been reproduced here with an appeal for anyone who recognises the sad and inadequate individual sending these unwanted slices of idiocy to pass on any information they can.

The letter claims to object to a post where I called out the Fawkes blog for trying to pass off a Coventry Telegraph article from 2005 as if it were current. Either they were hoaxed, or they deliberately recycled an 11 year old article as part of their routine sucking up to their real bosses - the press establishment - to smear former footballer Gary Lineker by suggesting that Walkers Crisps, in whose adverts he has featured, had been the subject of a raid which discovered illegal immigrants on their site.

Quite apart from the creepy “we know where you live” approach, the grammatical content of the letter is inept in the extreme. Dates are expressed “24, October 2016”, it talks of “pedalling falsehoods” - perhaps I ought to take one of these falsehoods for a ride out to North Wales one afternoon - and asserts that whatever transgression I have made “puts this st [sic] the malicious end of the spectrum of offences”.

I am told that the “Blog Complaints Commission” has ruled, which is only moderately amusing, that “this is a regrettable though surprisingly regular lapse” (lapse singular cannot be regular - think about it), and that I am “expected to publish a full correction”. The only action that may ensue is passing this communication to the Police.

To whoever is sending these missives - they will have precisely no effect, save to have me kick Staines and his fellow cretins even harder next time. I couldn’t give a flying foxtrot whether you know where I live or not. I have not the slightest intention of publishing any kind of correction at the behest of someone who clearly needs psychiatric help.

So, whoever is calling themselves the “Blog Complaints Commission” - go fuck yourself.

NB One last point which needs making here: the only other unwanted communications aimed at this blog have been (a) a Christmas card from the Fawkes rabble, and (b) a legal threat on behalf of the odious flannelled fool Master Harry Cole - who was at the time working for, er, the Guido Fawkes blog. As Private Eye magazine might have added, “I wonder if the two are in any way related? I think we should be told”.

I’ll just leave that one there.
Posted by Tim Fenton at 16:28

Judging by the witless content, the illiteracy and
the terrifyingly(!) 'threatening' nature of the missive, Tim, I would suspect the perpetrators as being those sophisticates at 'Herts Hammers 2016', the think-tank behind the homophobic song aimed at John Terry at last night's west Ham v Chelsea match.
http://www.caughtoffside.com/2016/10/27/photo-west-ham-song-sheet-with-homophobic-john-terry-chant-found-during-chelsea-game-at-london-stadium/

Paul Staines and his lackeys need to tread very very carefully, because they have already broken the Malicious Communication Act 1998 (section 1) and the Protection From Harassment Act 1997 (section 2).

I trust that you have saved all communications and the envelopes that they came in, as the Police will want these if they should decide to press charges. Even though it may be tempting to throw this trash in the bin.

They certainly should not be making threats, because this is punishable under Section 4 of PFHA with up to five years in prison.

someone who clearly needs psychiatric help

I had a look at your earlier post. The culprit should go for training on how to fold an A4 letter so that it fits neatly in a DL envelope.

You would think the impressive sounding Blog Complaints Commission would have it's own blog or website but alas they don't seem to have entered the online world.
Even the useless IPSO has a website.

I got my wife to lick the stamps!

I didn't realise they were self adhesive!

She doesn't lick much of anything these days!

You can't catch me. I live in Ireland.
I'm exempt from British legalities.

THe only way they can deal with me is to shut me down.
THey wont do it because I know where they live and I'll go round and eat them out of house and home!