Overshadowed by the Tory conference has been the trial at the Old Bailey of faithful Murdoch retainer Mazher Mahmood, aka the Fake Sheikh, who has, along with his driver Alan Smith, been facing a charge of Conspiracy To Pervert The Course Of Justice, or as many ordinary people call it, lying in order to drop someone else in the mire. The “someone else” was singer Tulisa Contostavlos, whose drugs trial collapsed recently. 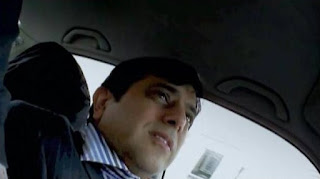 As the Guardian has reported, “The case against Contostavlos at Southwark crown court was thrown out in July 2014 when it was alleged Mahmood had misled the judge by giving conflicting answers on oath to questions over whether he and Smith had discussed the statement”. The judge called Maz out for lying to him.

“The case stemmed from an exposé in the Sun on Sunday that claimed Contostavlos, a former judge on ITV show The X Factor and aspiring actor, had allegedly arranged for a contact to supply Mahmood, 53, with cocaine worth £800 believing he was a Bollywood producer keen to cast her in a film alongside Leonardo DiCaprio” tells the report.

Maz’ problem came later: “The jury heard that Smith, Mahmood’s driver for 20 years, had chauffeured the singer and her two associates to her Hertfordshire home following a late-night meeting with Mahmood at London’s Metropolitan hotel, during which the three drunk cocktails … Smith told police that during the car journey home an argument over drugs had broken out between Contostavlos, who described herself as ‘hyper-drunk’, and her two associates, who were also intoxicated. During the argument, the singer had expressed her disapproval of hard drugs because a relative was an addict”.

But then “Smith changed his statement the following day to remove the anti-drugs comment, telling officers that as the car journey had been 13 months previous, he could not be sure who had said what … The prosecution alleged Mahmood and Smith discussed his original statement and then attempted to ‘airbrush’ the anti-drugs comments to protect Mahmood’s reputation and because he feared it might weaken the case against the singer”. That is fiddling with the evidence - and thus the crime.

Mazher Mahmood will be sentenced on Friday 21st October. There is a strong likelihood of a custodial sentence. And there is also a strong likelihood that many of Maz’ other entrapments will now come back to haunt him. As Paddy French at Press Gang has shown, Maz has established a reputation as a serial perjurer, an embellisher of facts and figures, a willingness to do what it takes to get the story, and stuff the consequences.

Maz has been known for years to have been more bent than those he exposed in the pages of the late and not at all lamented Screws. The Guardian’s Nick Davies once described him as “A criminal with an NUJ card”. Yet the Murdoch press continued to employ him, and much of the rest of the Fourth Estate kept schtum about his behaviour.

Now Mazher Mahmood has come to the end of the road. It is a great pity that those who employed him, knowing what he was like, were not in the dock too. And it is yet another compelling reason why Leveson 2 has to go ahead. Today was a good day for justice.

[Thanks are also due to James Doleman who live-Tweeted the whole trial]
Posted by Tim Fenton at 13:50

Media lawyer Mark Lewis said he had been instructed by 18 people to pursue civil claims against Mahmood, which he says could top £800m "with some awards dwarfing those seen in the phone-hacking scandal".

Some of the individuals were convicted of crimes which, they argued at the time, came as the result of false evidence.

"Over the last 25 years, innumerable lives have been ruined by the dishonest actions of Mazher Mahmood," Mr Lewis added. "People have lost their livelihoods, their homes and relationships, with some spending time in prison."

...can't echo enough any plaudits for the thorough 'Live Tweeting' tour-de-force by James Doleman. (..the outcome of the trial, well, perhaps a bonus...and then again !?)

I wonder how much of this court case will be reported in the various Murdoch organs? Place your best here.

"There is a strong likelihood of a custodial sentence" I certainly hope so. You can get banged up for lying about who was driving a speeding car. Trying to get an innocent person convicted for financial gain is surely far worse. The maximum sentence is life, but that's probably too much to hope for.

Beats me how these types get away with making dishonest living.

Get a proper job.

If I can earn an honest crust, so should you.

You make me sick.

"It is a great pity that those who employed him, knowing what he was like, were not in the dock too"
I expect they will be for the civil claims.

I see today's "Times" does report the story, but you have to wait to the last paragraph before finding out he worked for the Murdoch empire.