Our free and fearless press knows all about dog-whistling; this is how it engages with its readers, feeds their fears, fans their prejudices, tells them what to think. And there is no more blatant act of dog-whistling than that practised against “others” - those who do not speak English, brown people, black people, and especially followers of The Prophet. This is well known by the Murdoch mafiosi at the Sun.

So when several unaccompanied children who had been living in the refugee camp near Calais known as “The Jungle” were allowed to come to Britain because they had family here, the paper knew exactly what line to take in order to stir up hatred against the new arrivals: “MY, HAVEN'T YOU GROWN! First ‘child’ migrants who claim to be aged between 14 and 17 arrive in UK from Calais Jungle … sparking row over their true age”.

The article does concede “Nearly 180 kids living unaccompanied at the camp in Calais have a right to live in the UK with family already here”, but you have to read past all the dog-whistling to see that, kicking off with “PICTURES of the first migrant children arriving in the UK from the Calais Jungle camp have sparked debate over their ages … Many of the lads, who all claim to be under 18, sported noticeable facial hair and matched the border officials escorting them for size”. And there was more. 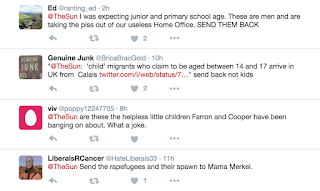 “But scores on social media suggested they are older than the 14 to 17 range given by the Home Office … Scores more children are expected to arrive from the Jungle this week”. Scores more coming. Brown people. Scary Muslims. The response from obedient Sun readers was bad enough for comments to have become unavailable overnight.

There are, though, plenty of replies left on the Sun’s Twitter feed to give a flavour of why the Murdoch doggies have come over all squeamish and blanked off the comments.

“I was expecting junior and primary school age. These are men and are taking the piss out of our useless Home Office. SEND THEM BACK … send back not kids … are these the helpless little children Farron and Cooper have been banging on about. What a joke … Send the rapefugees and their spawn to Mama Merkel”. And there’s more. 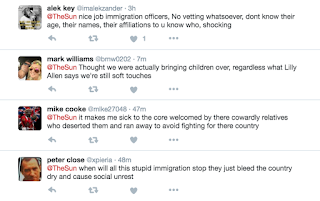 “Nice job immigration officers, No vetting whatsoever, dont [sic] know their age, their names, their affiliations to u know who, shocking … Thought we were actually bringing children over, regardless what Lilly Allen says we're still soft touches … it makes me sick to the core welcomed by there [sic] cowardly relatives who deserted them and ran away to avoid fighting for there [sic] country … when will all this stupid immigration stop they just bleed the country dry and cause social unrest”. Just what the Sun wanted.

Accusations of sexual assault, lawlessness, benefit fraud, dishonesty, disloyalty - and the all too frequently deployed carping that it should all be someone else’s problem. The Sun knew exactly what it was doing making the wholly made up claim about the children’s ages. It was done to stir up hatred. And that’s not good enough.

Once again, the Murdoch press is a byword for intolerance. Don’t buy the Sun.
Posted by Tim Fenton at 10:11

And of course IPSO will do sweet FA about it.

Andrew - IPSO is indeed probably too scared of the big national dailies to take them to task over it, although the much smaller Kent Online *did* get a rocket from IPSO for running a similar story about adult refugees being placed in schools in Canterbury and elsewhere.

in a related vein, just been reading on BBC News that complaints to IPSO about Kelvin Mackenzie's piece on C4 newsreader Fatima Manji have *not* been upheld. Which speaks volumes about (1) the efficacy - or rather lack of it - of IPSO and (2) the influence that NewsCorp wields. C4's Ben de Pear is rightly disappointed by the outcome.