So our new, and not unelected, Prime Minister Theresa May has given her keynote address to the Tory Party conference. In the hall, her words were, as custom dictates, rapturously received. But it was replete with false characterisations and assumptions, a confection that will mislead and ultimately let down those who put their faith in her. 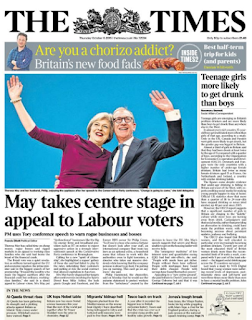 Here’s a typically misleading claim: “the referendum was not just a vote to withdraw from the EU. It was about something broader – something that the European Union had come to represent … It was about a sense - deep, profound and let’s face it often justified - that many people have today that the world works well for a privileged few, but not for them”. That view of the world will not be changed by exiting the EU. Because it is not the EU that has run our country for the benefit of the few. It is Theresa May’s party. 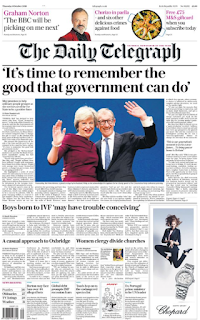 She told of “institutions like the NHS and BBC whose reputations echo in some of the farthest corners of the globe”. Institutions the Tories and their pals want to decimate. It gets worse: “today, too many people in positions of power behave as though they have more in common with international elites than with the people down the road, the people they employ, the people they pass in the street”. Whoever can she mean?

Theresa May is part of the elite: she has been a professional politician for almost 20 years. Yet there she was claiming “if you believe you’re a citizen of the world, you’re a citizen of nowhere. You don’t understand what the very word ‘citizenship’ means”. I’d back Socrates against her any day, thanks. But it gets even worse. 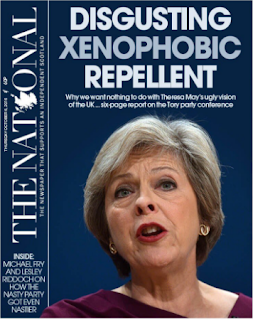 “Just listen to the way a lot of politicians and commentators talk about the public … They find your patriotism distasteful, your concerns about immigration parochial, your views about crime illiberal, your attachment to your job security inconvenient … They find the fact that more than seventeen million voters decided to leave the European Union simply bewildering”. Bullshit. That’s just trimming in the direction of the Daily Mail.

We know she is aiming at the tabloid press because there is also this nugget: “we will never again - in any future conflict - let those activist, left-wing human rights lawyers harangue and harass the bravest of the brave - the men and women of Britain’s Armed Forces”. You’re a hotel receptionist in a country likely to be invaded? You’re on notice - Our Brave Boys And Girls have carte blanche to kick the crap out of you.

Abandoning international law. Tanking the currency. Stoking xenophobia and bigotry. And all the while telling us how fair it all is. Some things haven’t changed since the departure of David Cameron - here is another Tory leader who is all talk, and no substance whatever.
Posted by Tim Fenton at 09:26

Do those pesky "left wing lawyers" include the person who drafted the European Convention on Human Rights, David Patrick Maxwell Fyfe QC a Conservative Party politician?.
As Australia has just agreed to 'loan' a few Trade Negotiators to the UK as they have none when probably 1000s are needed, Theresa is making very light of a very complex and costly Brexit.

So we get "pesky left wing lawyers" from one side and traitorous chicken coup Blairites from the other spectrum.

UK Political debate has degenerated into fatuous mudslinging and all those in the middle will be left to sort out the mess caused by our politicians. Let's hope the mess doesn't get too great before a modicum of sense prevails ie, Theresa doesn't have to be Mrs Maybeormaybenotmakingitup.