Any thought that the Murdoch goons at the Super Soaraway Currant Bun had finished with their campaign of racist bigotry against those unaccompanied under-18s who had been allowed to leave the Calais refugee camp and join their families in the UK was dispelled this morning, as the paper once again embarked on its dog-whistling witch-hunt, this time claiming that some of those being allowed in have bad teeth. 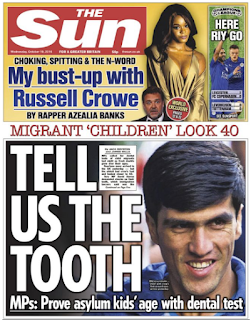 “Migrant ‘Children’ Look 40 … TELL US THE TOOTH … MPs: Prove asylum kids’ age with dental test” ranted the headline. The supporting article, or perhaps, in the spirit into which the Murdoch doggies have entered, that should be “Article”, under the joint by-lines of Jack Royston and James Mills, continues in the same vein.

“Fourteen more 'kids' etched with crow's feet arrived in Britain yesterday and were fast tracked into the UK for being ‘minors' … MPs called for dental tests of child migrants last night as fresh doubts grew over their ages”. How many MPs? Just the two: David T C Davies, and Alec Shelbrooke.  So we read “Tory MP David Davies demanded checks on their teeth, which immigration lawyers said was the ‘strongest proof of age’”.

How many lawyers? ONE. Who should hang his head in shame. As should David T C Davies and Alec Shelbrooke, who airily “said he was expecting to see ‘children who look like children’, adding: ‘It makes a mockery of the situation’”. So let me put these two odious bigots, who, let us not forget, are being paid for out of my and your taxes to spout their deeply unpleasant and intolerant views, straight.

These teenagers have most likely spent all their lives without access to decent health care - including dentists. And it’s entirely possible for a combination of initially bad teeth, poor diet and zero health care to result in those teenagers having even worse teeth by the time they get to their mid-teens. The Sun and its equally culpable hacks has provided zero evidence to back up its claim. Nor will they. Ever.

On top of all that, many of these young people have seen the kind of horrors - and fled from worse - from which the comfortable and over-paid inmates of the Baby Shard bunker are cocooned. Some have been caught between the so-called Islamic State and the Taliban. Many have had to endure months of travelling, over land, over water, through one hostile jurisdiction after another, only to spend months more in the Calais camp.

And all that the Tory right and Murdoch press can do is to whip up hatred against them.

That is why the Sun is able to report that there has been disquiet expressed on social media - because it is coming from their rabble-rousing. They dog-whistle; the more easily persuaded and fearful among the population react as the Murdoch droids wish. And so  more hatred and distrust is sown against those towards whom we should be extending a welcoming hand. The result of all of this is rank intolerance.

There are no words to describe these MPs, hacks and others participating in this demonising of the less fortunate. This is just crass. Don’t buy the Sun.
Posted by Tim Fenton at 09:39

According to an investigation published in the British Medical Bulletin, and reported in New Scientist, dental checks are inaccurate a third of the time. This leaves any decision based on such medical 'evidence' open to a long and expensive appeal.

I don't know if its a law, rule, or just guidance, or just some papers... but I thought identifying "children" within papers was "against the law" (Quoted due to not knowing the detailed ins and outs, also an assumption that "a child" is someone under the age of 18).

Surely all the children identified by the Scum, Daily Hate Male, et. al. now have a case against their being publicly identified even though they are minors/children?

It wasn't so much to check their teeth were health, although some have suggested that (you know like you do with livestock), but as a judge of their age, although this would appeared to be flawed science anyway at least according to the British Dental Association, via the BBC, but what do they know. They're only "experts".
After all everyone knows your teeth change the morning of your eighteenth birthday.

They aren't dental health checks but checks to see if someone has stopped growing. With aren't accurate for ages 15 to 20 though as growth rates vary.
I'm puzzled though. I thought that we were only allowing children in who have relatives here already. Which implies some sort of proof.

I see the BBC have helpfully opened up this to a 'Have your say'.

Its sickening reading some of the comments and really does scare me as to how this will pan out. We really haven't learned from any of our recent history.

Both MPs should be publicly hauled over the coals for inciting racial hatred.

A spokesman from one of the charities looking after these children has said on the BBC's World At One that one of the photographs being bandied about by the gutter press is of an interpreter accompanying the latest group to arrive here and not one of the children.

It has been suggested by the Guardian that the adult looking people photographed are translators. 'George Gabriel of Citizens UK, which has been working in the Calais camp for more than a year, said that one of the photographs of “overage” refugees that appeared on the front pages of British newspapers on Wednesday might in fact be a translator.'

The Telegraph features a photo of one gentleman in a green hoodie saying "I London", purporting it to be one of the phoney children seen in Croydon. A chap by the name of Bjorn Kietzmann on Twitter claims to be the person who took that photograph and that it was just a refugee pic taken in Calais, not Croydon.

I have also seen many tweets to the effect that the Daily Mail's method of determining the apparent age of these refugees is a fun app by Microsoft, whose results are questionable to sa the least, since several tweeters have shown it wildly over-estimating the ages of, among others, promotional photos of Harry Potter cast members, a 7 year old girl, early shots of the band One Direction, and several young footballers...