Today, Mazher Mahmood, aka the “Fake Sheikh”, will be sentenced on a charge of Conspiracy to Pervert the Course of Justice, or as most people would call it, lying. Maz and his driver had been found guilty by unanimous verdict of a jury at the Old Bailey: his legal team declined the opportunity to have him give evidence. The delicious irony of a Murdoch servant caught lying will not be lost on anyone right now. 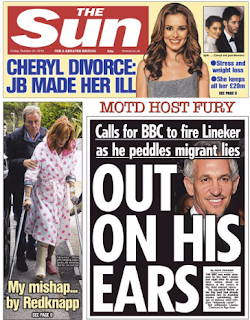 Because this morning, the Super Soaraway Currant Bun, in whose service Maz pulled the porkie that led him to get guilty, has decided to call “liar” on someone else for the purposes of furthering its racist and bigoted agenda. Former footballer and now lead presenter of Match Of The Day Gary Lineker had taken exception to the Sun’s judgmental campaign against refugees, and the racial bigotry it had whipped up. He had to be attacked.

So it came to pass that readers were told “MOTD Host Fury … Calls for BBC to fire Lineker as he peddles migrant lies … OUT ON HIS EARS”. And from where did this fury, these calls, emanate? Only from the deluded inmates of the Baby Shard bunker, sadly. And two Tory MPs who are being paid from my and your taxes. So what’s the deal?

“Leftie luvvie Gary Lineker ‘should be sacked’ for peddling charity lie about ‘child migrant, 38’ … BBC under pressure to act as Match of the Day host peddles migrant lies about 'child migrant, 38’”. To no surprise at all, the Murdoch goons can’t make their minds up whether they’re calling on one lie, or several. In fact, the actual number is zero.

But do go on. After kicking off with smearing Lineker as “jug-eared” - as opposed to the filth-brained, bigoted, crawling and intolerant hacks at the Sun - we read “millionaire Lineker went on to retweet a charity’s lie that the oldest-looking asylum seeker pictured with new arrivals was a Home Office interpreter”. He also gets smeared as “left-leaning”, just to be on the safe side. But enough - let’s introduce a few facts here.

1 The age of the person whose photo appeared in the Sun has not been established, and the “38” claim is therefore invention. Or, as the Sun likes to call it, lying.

2 Even if the person in the photo was not an interpreter, it doesn’t make him a “migrant”.

3 Lineker did not peddle any lies. A Retweet is not an endorsement.

4 The Sun’s claim “Test exposes ‘kid’ as adult” refers to someone else.

5 And as the Beeb has reminded us, “Gary is a freelance broadcaster and this is a personal Twitter account”. In other words, shove off, Murdoch droids.

This has not deterred Tory bigots David T C Davies and not-at-all-smart Alec Shelbrooke from ranting about Lineker’s stance, claiming that showing compassion, and being repulsed by racist bigotry, are somehow a sign of political activism.

What we can be sure of is that when Mazher Mahmood is sentenced today, these two prime specimens of public sector sponging will be nowhere in sight.

And the best the Sun will manage is “look over there”. What a bunch of hypocrites.
Posted by Tim Fenton at 09:57

"Left leaning" seems to mean "disagrees with us". TBH I've no idea how Gary Lineker votes, nor should I. It's not really surprising though - left and right have long since stopped being political descriptives, and are now more pejoratives. At least as far as the press are concerned.

The arseholes in the Sun know that a lie is an untruth spoken or written by someone who knows it to be untrue. Gary Lineker was unaware at the time that the interpreter tag was incorrect. So, by calling GL a liar, whoever wrote the piece should be given, in accordance with his own intolerance, the boot.

I see Mazher Mahmood has been given 15 months at Her Majesty's Pleasure. I bet the Scum doesn't have that on its front page. And I bet he gets a job back with Uncle Rupe on release.

Even the Beeb got in on the "in defence of The Sun" act by giving Kelvin Mackenzie's "opinion" piece a big quote on R4 Today re IPSO's "clearing" his "opinion" piece on the C4's news presenter's dress garments this morning. And all said in a non ironic tone of voice.

Instead of naming it their "newspaper slot" they ought to call it "thoughts from the dinosaur swamp"?