Sometimes, one brief moment of laughter is all it takes to bring home a very serious point, and for London’s increasingly occasional Mayor Alexander Boris de Pfeffel Johnson, that moment came last night as he was cycling back home from a dinner engagement, an arrangement that has the advantage of not being a transport mode where the user can get themselves breath tested and their licence revoked. 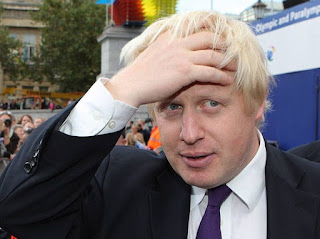 Bozza was spotted by a black cab driver, and, as the man on the spot representing an industry that the Mayor has so spectacularly sold down the river, the cabbie took direct action to leave the Blond in no doubt where he stood. Lowering the driver’s window, he made a gesture suggesting that Bozza was in the habit of stimulating himself by hand, and proclaimed “You’re one of them, mate”.

Bozza was deeply affronted at the suggestion that his only pulling power was to be given a big hand as a Neville Thurlbeck tribute act, and so he summoned up all of his considerable linguistic skills and fired back “F*** off and die - and not in that order”. Crikey readers! Beano Boris clearly well ticked off!! But while many, particularly those on the right, are shrugging this off as more Bozza banter, there is a more serious undercurrent.

What you will not get with UberX

Johnson has now returned to Parliament as MP for Uxbridge and South Ruislip, with the sole intention of securing the keys to 10 Downing Street for the exclusive use of Himself Personally Now when Young Dave decides to pile off some time before the next General Election. However, and here we encounter a significantly sized however, his party may not be so enamoured of the idea, and the taxi encounter was one contributory factor.

Bozza has all but given up on exercising any executive power over Transport for London (TfL) to take action on cabbies’ behalf over issues that are causing serious problems, not least the predatory behaviour of driver and rider matching service Uber, despite the playing field between those who have spent years getting The Knowledge and have to drive a particular type of vehicle, and Ron Hopeful with his Prius and satnav, not being level. 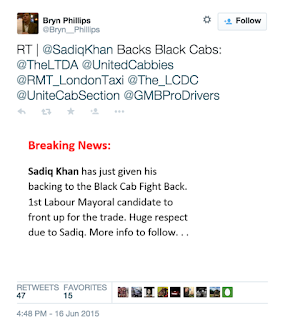 There is also the problem of continuity in licensing, with cabbies and their representatives accusing TfL of taking far too long with their paperwork, to the extent that drivers have to spend weeks at a time off the road and therefore lose earnings - which are already being hit by the unchecked incursion of Uber. Bozza has effectively washed his hands of the problem - but one potential Labour successor as Mayor has taken up the cabbies’ cause.

That man, as Bryn Phillips has observed, is Sadiq Khan, who has endorsed the “Black Cab Fight Back”. Other Labour hopefuls may well join him. And that, when put alongside silence from Tory hopefuls, means that The Blue Team may have lost yet more of the Black Cab Vote for next year - a constituency that voted heavily for Bozza in 2012. That’s another lousy legacy from an utterly lousy Mayor.

Meanwhile, Bozza tries to convince Londoners he is still a coming man. As it were.
Posted by Tim Fenton at 17:28

I would give a tenner to be within range the next time Bozo the Blonde hails a black cab.