And so another election campaign hoves into view: no sooner has the country voted in a new Government than voters in London face the prospect of electing a new Mayor next year, to replace the increasingly occasional incumbent Alexander Boris de Pfeffel Johnson, who is now (allegedly) an MP. While Labour front-runners jostle for position, the Tories were scratching around for a candidate. But not any more. 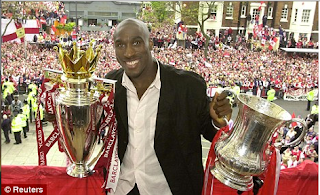 Being Mayor of London does not get this good. Ever

First, the name of Richmond Park MP Zac Goldsmith was pitched: he would have cross-party appeal, and is good on the environmental side, which could be A Very Good Thing Indeed, given Bozza’s lousy record on air quality. Things were looking up. And then, for reasons best known to Himself Personally Now, former footballer Sol Campbell decided to throw his hat in the ring. This will not end well.

Sol’s appearance in the contest for the Tory nomination has been announced with the usual lack of style by Rupe’s downmarket troops at the Super Soaraway Currant Bun, with deputy political editor Steve Hawkes’ schtick being taken off-paywall into the piss-poor SunNation website. Here, readers are told that Sol has declared “I’m in it to win it … I’m going in with my eyes wide open. I know I’m not going to be a frontrunner”.

And the Sun knows that he’s serious about going into politics as “The Premiership legend first revealed a desire to get into politics last year - when he blasted Ed Miliband over Labour’s Mansion Tax”. Yeah, right: every two-bit pundit anywhere from the centre-right to the far-right fringe did that. Anything more to recommend him? “He met former Tory party chairman Grant Shapps before Christmas for talks”. Not promising, is it?

What is even less promising is Campbell’s apparent naiveté: he “famously walked out of Highbury at half-time after making two clangers in a game against West Ham – sparking rumours of a breakdown … But the footballer insisted he can cope with whatever politics throws at him. ‘I’m a different man now,’ he said. ‘Back then it was venomous, I mean people wanted to wipe me out’”. And he expects politics to be any different?

Quite apart from half of North London - the half that supports Spurs - not voting for him this side of hell freezing over, there are all those issues that Bozza has either dodged, made worse, or left half-completed. What about cycling infrastructure? Doing something to help the black cab trade that Bozza more or less abandoned? Reversing the decline in bus services? Getting all those Tube upgrades back on track?

And, as the man said, there’s more: affordable housing, air pollution, reducing all that central London traffic, reversing Bozza’s legacy of waste (Cable car, vanity buses, Garden Bridge), rebuilding bridges with the Metropolitan Police and the fire service, making public transport affordable and accessible, and - oh yeah, being a full time Mayor, which the capital hasn’t had since Bozza got his feet under the desk.

Adam Bienkov at politics.co.uk has put it bluntly: “On the face of it Campbell's hopes don't seem particularly bright. His inexperience and unpopularity among many London voters means the Tories seem unlikely to turn to Sol”. If he really wants to face the waves of media unpleasantness, and really thinks he can make a difference, fair enough. But if he’s not that serious - and it will get serious - he should forget it. Whatever the Sun says.
Posted by Tim Fenton at 17:30