Right-wing lobby group the IEA, which likes to think of itself as a “think-tank”, because someone there occasionally thinks before their ideas tank, is vehemently opposed to the HS2 project. Before that, they were equally opposed to Crossrail, which is now nearing completion, and thus far, within budget. However, and here we encounter a significantly sized however, their rail “expert” Richard Wellings predicted otherwise. 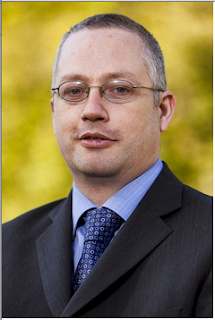 Sadly for Wellings, someone remembers his wayward prediction, and has served it up to him today: step forward Paul Bigland, who has not been backward in coming forward to remind the IEA stooge that he reckoned Crossrail would cost between £20 billion and £30 billion, while it is on target to come in at within £15 billion. So Wellings is, to take an average of his two estimates, £10 billion out, or 66% too high.

This was clearly too tempting for Bigland not to remind The Great Man (see HERE). But, rather than ‘fess up, Wellings has decided to brazen it out, which does not look like a very good move. On Crossrail, Wellings had previously told that “The cost has been estimated at £16 billion. But given the disastrous history of big Government projects this seems likely to rise to £20 or even £30 billion”. There is his prediction. 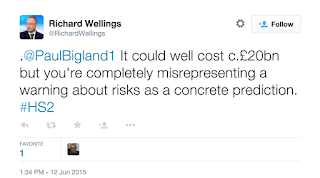 How does he plead today? “Crossrail was delayed and descoped in 2010 to address cost overruns … Crossrail was heading for c.£20bn in 2010, which is why it was delayed and descaled”.But he’d made a prediction, so what about that? “Wrong - I pointed to the risk of major cost overruns given the history of previous big rail projects”. Ah, so it seems that A Big Boy Did It And Ran Away. But, as the man said, there’s more.

“It could well cost c.£20bn but you're completely misrepresenting a warning about risks as a concrete prediction … There was no 'cost projection', just a warning about potential risks given the long history of project disasters … Let's wait and see shall we? The full opening has been delayed 18 months until the end of 2019”. What? The cost might add another £10 million while the stations are being fitted out and the track laid? Come off it.

Again, Bigland challenged Wellings. “Except the fact that Crossrail was delayed and descoped in 2010 vindicates my previous concerns about cost risks … Megaprojects typically go significantly overbudget, so sensible to be concerned about Crossrail … There was no 'cost projection', just a warning about risks, vindicated by the delay/descoping in 2010”. Enough. Let’s look at his citation for “delay and descoping”.

His own blog tells “The [NAO] report states that to reduce costs to an acceptable level, ‘the schedule for opening the railway has been extended’ … In other words, the project seems to have been descoped and apparently will not be built to the specifications originally envisaged”. The citation is Wellings’ own guesswork.

Richard Wellings got caught trying to pull a frightener on the cost of Crossrail. He then tried to wriggle off the hook by citing another of his own assumptions. And he still expects to be taken seriously. Which, considering his guesswork includes the claim that HS2 would cost £80 billion, is what he will not be. Back to the drawing board, Richard.
Posted by Tim Fenton at 17:31

Not sure how it can be considered to be "de-scoped", when it has been extended to Reading.

And a branch to Tring! (Albeit not in the current build Afaik)

The nao recommendation of slowing down a touch is a sensible way of reducing exposure to the risk of contractors seeking hurry payments for rush jobs and other risks associated with programme squeeze. Hardly sign of impending disaster; just prudence - and isn't prudence what fiscal conservatives want?