The appearance on the Labour leadership ballot of Islington North MP Jeremy Corbyn has sparked predictable mischief among the less grown-up part of the right, which is to say, rather a lot of it. Once someone discovered that signing up as a registered supporter of the Labour Party could be accomplished for just £3, the stampede was on - well, among all those Clever People Who Talk Loudly In Restaurants, anyway - to join up. 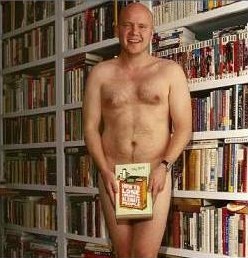 He's not known as Captain Bellend for nothing

And among the gleeful right-wingers splashing their modest amount of cash was the loathsome Toby Young, taking time out from promoting his Free School, and other activities that meet with the approval of Himself Personally Now, who enquired yesterday evening “So what’s the minimum price to be able to vote in the Labour leadership election? Can someone point me towards the URL to join?” 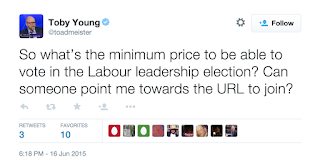 Having figured out the drill, Tobes then joyfully relayed the news that his signing-up as a Labour supporter was complete, together with the not particularly hilarious hashtag #ToriesForCorbyn. From there, his sense of anticipation knew no bounds: “How large is the electorate in the Labour leadership election projected to be? Anyone know?” he asked eagerly. However, and here we encounter a significantly sized however, all was not well. 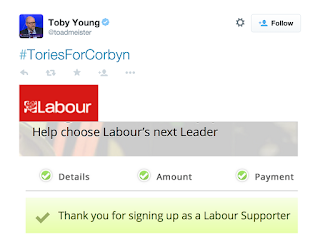 This means he has accepted the declaration ...

When completing the application to become a Labour supporter - you can see the straightforward form and its wording HERE - there is a declaration that says “I support the aims and values of the Labour Party, and I am not a supporter of any organisation opposed to it”. By agreeing that form of words, Toby Young has committed not one, but two fraudulent acts, as anyone doing a few minutes’ Googling could discover. 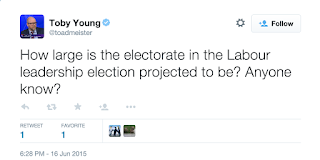 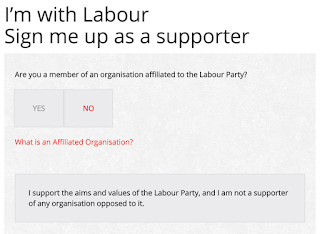 ... and this is that declaration. Pants on fire, Tobes

And, as the man said, there’s more: nor can Tobes claim “I am not a supporter of any organisation opposed to [Labour]”. Take, as an example, a post on No Sacred Cows from July 2011, where he declares “Why I’m A Conservative”. Since then he has wasted no opportunity to speak in favour of Young Dave, and of course Michael “Oiky” Gove. Tobes is a supporter of an organisation opposed to Labour. Fraud Number Two.

One can only hope that the Labour Party, on seeing the light from Tobes’ burning trousers, takes pity on him, returns his £3, and points him in the direction of the nearest fire extinguisher. It would be most unfortunate if all those clearly fraudulent applications to become supporters were passed to the Police, although Tobes being given a caution and therefore a criminal record would be genuinely mirth-inducing.

Toby Young has been thought a fraud for years. Now he has made it official.

[UPDATE 1830 hours: the Labour Party has declined to make Tobes a "supporter", and, moreover, it appears not to be prepared to reimburse his £3. 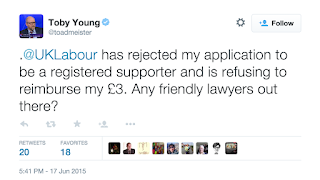 The Great Man was clearly incandescent with rage: ".@UKLabour has rejected my application to be a registered supporter and is refusing to reimburse my £3. Any friendly lawyers out there?" he blustered to little effect. 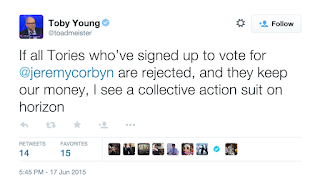 There was more: "If all Tories who’ve signed up to vote for @jeremycorbyn are rejected, and they keep our money, I see a collective action suit on horizon" he pleaded, to even less effect.

Let me put Tobes straight: he lied to get himself through the registration process, so if anyone is going to take action over his pathetic stunt, it's most likely to be the Labour Party taking it against him.

Moreover, Labour can make a good case for levying an administration fee for their trouble, which might come to, oh I dunno, how about, er, £3?

As for a "collective action", well, as Billy Connolly once said, there's going to be some swearing. Tobes, just take your latest slice of bellendery and f*** right off with it]
Posted by Tim Fenton at 09:58

Apparently the Labour party are weeding out the bogus applications but not refunding the cash. So hilarity all round.

I think this will be as successful as Young's pro-cuts protest. The one to which even he couldn't be bothered to show.

Didn't Toby also have a scheme for Tory and Ukip voters to swap votes which came to naught?

Quite frankly I hope he does get a class action together and is dismissed as a vexatious litigant.

Surely the Labour Party should refund his cash as being rather tainted coming from a fraud (without convictions), like that cash donated by a fraudster to the Liberal Democrats that they should have paid back.

It would also set a precedent for many donations to the Tories I suspect although mostly being frauds themselves I wouldn't have great expectations.

I suppose there is mileage in charging a handling fee of dirty money?

He sets a fine example to the children at his free school.

I rather hope that a few thousand of them are successful. No-one can predict the future; Corbyn as PM would make them more careful abut what they wish for.

The Labour Party managed to deduce that Toby Young is a Tory.

So they're only slightly less incompetent than we thought.