Orgreave - Burnham Does The Right Thing

Most younger observers of politics will only remember the 1984/5 Miners’ Strike through the prism of history, and especially the events that defined it, such as the so-called “Battle of Orgreave”, a confrontation between pickets and the Police near the eponymous coking plant just to the east of Sheffield. Many were injured; dozens of pickets were arrested. Not one of those charged with any offence was convicted. 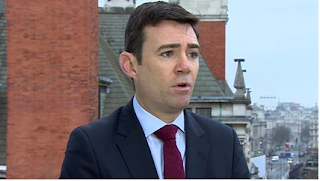 Right again - stay with it

The Independent Police Complaints Commission (IPCC) has now concluded that it “has found evidence to suggest that police officers assaulted miners at the mass picket of the Orgreave coking plant during the 1984-85 miners’ strike, then perverted the course of justice and committed perjury in the failed prosecutions which followed”, but that it “will not mount a formal investigation into allegations of criminal wrongdoing by police”.

Excusing its inaction, the IPCC has told that “too much time has passed for the allegations of assault and misconduct to be pursued”. Those who have been following the investigations of historic child sex abuse going back rather further than the mid-80s, and the continuing fresh inquest into the 96 who lost their lives in the Hillsborough stadium disaster in 1989, may find that conclusion interesting. 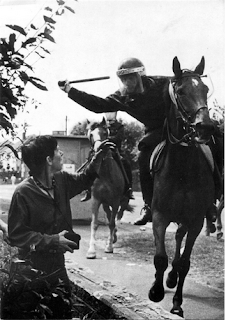 One person who has found the IPCC apologia interesting, in the way that it is not good enough, is Labour leadership contender Andy Burnham, whose previous experience of historic inquiry includes he and Maria Eagle urging the last Labour Government to reconsider the Hillsborough evidence. In the wake of what many see as an establishment whitewash, he has asked David Cameron to set up another Independent Panel.

As the Guardian has reported, “In a letter to David Cameron, Burnham noted that he worked 'very closely' with the prime minister on the Hillsborough process, which led to the inquests into the 96 deaths in 1989 being quashed after 21 years and two new investigations into alleged police malpractice … The home secretary, Theresa May, said in a statement that she would consider any request”. 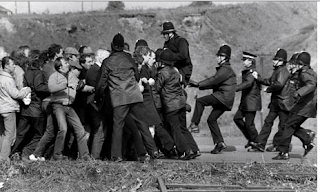 This is not merely a leadership stunt: there are many issues surrounding the received wisdom on Orgreave. These included the deployment of many “policemen” who did not display their numbers. The suggestion was made at the time, notably by Tony Benn, who represented the nearby constituency of Chesterfield, that some of these were from the armed forces. Then there was the quite blatant manufacturing of Police evidence.

That so many officers seemingly managed to find the same form of words when filling in their notebooks was one reason the cases against those arrested were thrown out. The impression of interference by Government has lingered for decades. And, above this, goes the thought that, once again, South Yorkshire Police was institutionally corrupt and not fit for purpose. It was, after all, the same force that had fouled up so badly at Hillsborough.

So Andy Burnham has made the right call. He must now follow through on that call.
Posted by Tim Fenton at 14:54

Hows about this then? Every copper on duty that day is considered guilty and must prove their innocence of assault and subsequent fabrication of evidence, or shop those they know did commit criminal offences. Its how the rest of us are increasingly treated by the authorities these days.

The armed forces in police uniforms without numbers bit may be overlooking a couple of things. First, if they went to all that trouble, why mess it up over a simple point like that? And how have they managed to keep them all quiet since? There is a simpler explanation for the police without ID tags. Every week the Met sent several bus loads of "assistance" to the mining areas. A few years earlier there had been the Brixton riots and it was reported at that time that many of the police had "lost" their ID numbers or senior officer insignias.

Most forces sent officers into these areas and some of them came back with much altered views of the Met, and not in a postive sense.