The Murdoch Times, despite the mounting tide of evidence showing their story yesterday to be false to the point of reputational embarrassment, has kept up its assault on former NSA contractor Edward Snowden, with an editorial loftily claiming “Putin’s Poodle … Edward Snowden has betrayed his country and his calling, and endangered the West”. This magnificently crafted fiction masks a rather less pleasant reality. 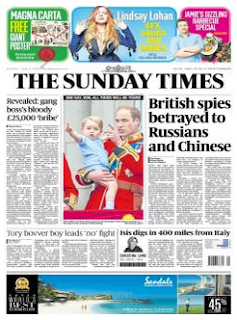 That reality reveals a convocation of long-time US Government supporters and less than totally reliable journalists who have come together to propagate a smear campaign which would be laughable, were it not being taken seriously by those who should know better. But let us start at the very beginning, as it’s a very good place to start. That leads to the pitching of the first name in the frame, that of Rupert Murdoch himself.

Rupe has been spinning for Washington since 1983, when he was first ushered into the Oval Office to meet Ronald Reagan. Then, the spin was in support of involvement in El Salvador, Guatemala and Nicaragua, which meant backing forces for whom human rights were sometimes an afterthought, but more often ignored completely. It is no coincidence that it was a Murdoch paper that was used to launch the attack on Snowden.

Moreover, it should have surprised no-one: as Jason Leopold told in a Vice News article eleven days ago, “A bipartisan group of Washington lawmakers solicited details from Pentagon officials that they could use to ‘damage’ former NSA contractor Edward Snowden's ‘credibility in the press and the court of public opinion’”. What is also not surprising is who was used to write up the Sunday Times story.

Sunday Times security correspondent Richard Kerbaj was one of the names on the by-line: his achievements include April’s totally untrue claim that the Tories were sounding out former New York City Mayor Michael Bloomberg to contest the London Mayoralty next year. But the most interesting presence is that of Tom Harper, whose CV includes a spell at the Independent, where he became Investigations Editor.

Harper was in the vanguard of those trying to draw attention to so-called “Blue Chip Hacking”, suggesting via a series of articles (see HERE and HERE) that many large corporates had been indulging in practices which put the allegations levelled at the likes of Andy Coulson and Rebekah Brooks in the shade. His work was cited by those seeking to get their readers to “look over there” (Stephen Glover in the Mail is typical - HERE).

However, Zelo Street understands that the “Blue Chip Hacking” report Harper cited, when viewed in an unredacted state, shows that, in reality, the major corporates were the victims of hacking, not the perpetrators. That was not allowed to enter at the Hacking Trial, where Ms Brooks’ defence team made good use of Harper’s work. And Harper then landed a job at the Murdoch Sunday Times, a most fortunate coincidence.

The ST once had a reputation worth defending. No-one outside the Murdoch empire is prepared to do that now.

[UPDATE 1820 hours: Tom Harper has appeared on CNN, to face some comparatively gentle questioning about whether he has any of those, you know, facts to back up his story.

He did not manage to cite even one.

How did senior 10 Downing Street sources know that the files leaked by Snowden had been breached? "Well, I don't know the answer to that ... all we know is that this is, effectively, the official position of the British Government".

How did the British Government know what was in these files (remember, Snowden worked for the NSA, not GCHQ)? "They may have known for some time what Snowden took" [the NSA admitted some time ago it didn't know].

And then he said it again: "We just publish what we believe to be the position of the British Government".

So if Harper and his pals don't know, how the hell do they conclude "British spies betrayed to Russians and Chinese"? And what happened to all that free and fearless investigative reporting?

Tom Harper just sprayed his remaining credibility up the wall on CNN. He is being used as a patsy in yet another Murdoch spooks-excusing exercise. But he'll be getting paid for it, so that's all right, then]
Posted by Tim Fenton at 13:31

Just reminiscing over that possible ever reliable sauce (was she on it?).

Could Rupert M have given up on the credibility of his Manhattan outpost (and The Sun) when deciding to attack "Snowden" this time or was she just used to attack the Guardian's credibility by a "perceived" threat to our spooks "in the Government's view"? Only one winner there!

Had your 'take down' notice regarding the front page of the ST from TNL yet? Some have apparently.