After the Daily Mail single-handedly fouled up the summer season for many businesses on the Greek island of Kos, by running scare stories about refugees who had arrived there after fleeing wars in Syria and Afghanistan, one might have thought that the tabloids would think twice before trying to frighten Brits away from foreign parts. But that thought has been shown to be misplaced after an incident at a hotel complex in Cyprus. 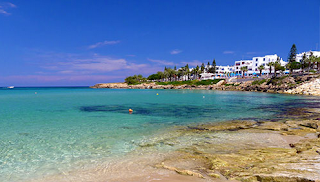 The Anastasia is situated in the resort of Protaras, an area north of Ayia Napa which was bypassed by tourism until the Turkish invasion of 1974 left the town of Famagusta on the other side of the fence. Since then, Protaras has become a favourite destination for Brits, because, well, it’s warm and sunny, most people speak English, you can get a fry-up and lots of f***in’ lager any time of the day or night, and they drive on the left.

And it is at the Anastasia that, it has been claimed, someone attempted to abduct children last Tuesday. The Mirror’s Scottish sister paper the Daily Record threw the kitchen sink at the story: “Holiday Hell … A GANG dressed as waiters tried to snatch children … This Romanian couple … the getaway car crashed … a gang of at least 10 men and women had been scoping out the plush hotel”. And there was more.

“They were spotted filming and taking photographs of the children as they played in the pool and it is claimed some wore waiters’ outfits to blend in to their surroundings”. The Mail dutifully churned the story over. The Mirror then doubled down with “Cyprus hotel child abduction: Dad feared Madeleine McCann-type snatch after daughter found in kidnapper's arms”, an allegation about the same area from last year. The Mail recycled that, too.

Some holidaymakers have been moved to other hotels. Others have been flown home. So what is the reality? Ah well. The local Police told that “We questioned the suspect, went through his phone and also searched his home. Nothing we found suggests that he is part of a child-abducting gang or that he was stalking children. The footage on his phone showed tourists partying and no children”. One alleged suspect.

It got worse: he was not Romanian, but Bulgarian. Well, they all look foreign and don’t speak English, eh? How could so many holidaymakers get it so wrong? All too easy: they are fed a diet of foreigner-hating by the press, the seed of paranoia is planted, rumour takes hold, one person becomes a gang, someone taking pictures becomes a stalker, a paedophile, a child abductor, and then panic takes over.

Then the same press that fed all those unsuspecting holidaymakers the crap about foreigners feeds off the panic to feed them yet more crap. Most worrying of all, they swallow it. What happens next - an eastern European whose English is a little shaky takes a photo of his new car to send to relatives back home, he doesn’t realise someone’s kids are playing nearby, and the next thing, he gets kicked to death by the paranoid mob?

Someone needs to show responsibility here. Because our free and fearless press can’t.
Posted by Tim Fenton at 13:14

I see that according to s story in the Times today that the baying mob attack has already happened. Or is that just another media storm?