Kate Moss - How Not To Fly

The first rule of believability, when it comes to citing our free and fearless press, is not to believe what you read in the Mail without a reputable second source. So when that paper - and the Murdoch Sun - rounded on model Kate Moss and told perhaps over-creative stories of how she may or may not have behaved on an EasyJet flight from Bodrum to Luton, caution had to be the watchword. 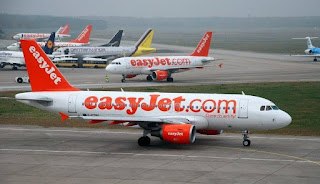 But that Ms Moss was escorted from the aircraft on arrival at Luton is an undisputed fact. And, despite the Guardian’s Suzanne Moore - who is highly sound, so I read her thoughts before posting - telling that the tabloids are going OTT (true) and that they have form for going after Ms Moss (also true), there are some things that passengers must not, repeat must not, repeat MUST NOT do on board an aircraft.

So what did Kate do that she should, perhaps, not have done? Simples. The cabin crew took the decision that Ms Moss should not be served alcoholic drinks on the flight. Whether they might have been picky or over-cautious does not enter: the cabin crew’s decision is final. It will inevitably be backed up by the pilot in the left-hand seat, and that person is not known as the Commander of the aircraft for nothing. 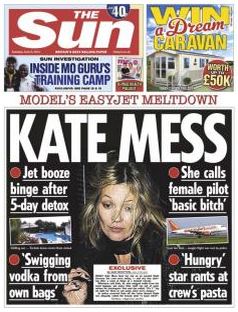 It has also been confirmed that Ms Moss then served herself vodka which she had in her cabin luggage. This is a complete no-no: the only alcohol that may be consumed on board an aircraft is that served by the cabin crew - in other words, at the discretion of the flight’s Commander. Even if you haven’t already been refused drinksh, this is likely to get you a Grade A bollocking from the cabin crew.

So Kate appears to have already been on two strikes when some other - as yet unspecified - act of disruption took place. It may have been other passengers wanting to take photos, it may have been, as one report has suggested, that she had to be instructed to return to her seat as the aircraft was on approach to Luton, and wanted to discuss the matter (also highly inadvisable). But whatever it was, it led to a Police escort.

What has also been confirmed is that Ms Moss made a singularly disobliging comment to the flight’s Commander as she departed (the phrase used, it seems, was “basic bitch”). This may appear trivial, but, once again, the Commander is not thus named for nothing. And the Commander, having summoned the Rozzers, will have to account to EasyJet management for her decision. This may have repercussions.

The carrier may decide to bar her from its flights for a period of time. This would restrict Ms Moss’ travel options for getting to a destination she visits more than occasionally. This may seem draconian. But the flight’s Commander carries ultimate responsibility for the safety of crew, passengers, and aircraft. So, if any passenger - whether or not they are famous - does not behave as instructed, they can quite legitimately be refused passage.

Air safety is a serious business. Boring but true.
Posted by Tim Fenton at 12:53

Kate Moss. Luton Airport. Easy Jet. Never seen before in the same sentence. Has she fallen on hard times?

the OTT claim has a sort of truth. If this case involved a tabloid reading builder called Gary it wouldn't have got a mention. In typical crap hack form this is considered a "news!" story because it involves a sleb and not because it involves the safety of an aircraft. Easyjet crews often call the police to arseholes and it rarely gets reported, this Commander will not be losing sleep about what the company thinks about her actions.

Poor headlining by the Mail. You'd expect something like "TERROR in the skies as Kate Moss drinks her own BOOZE"

What on Earth? There's nothing about EasyJet's policy of locally sourced sandwiches made by non-British bare hands.