Much reported yesterday - although only within the media community - was the decision by those who run free sheet City AM to replace experienced journalist David Hellier, who had been editor for only eight months, with Institute of Directors spinner Christian May, better known to Zelo Street readers as the appallingly arrogant, thin-skinned and stuck-up flatmate of the odious flannelled fool Henry Cole. 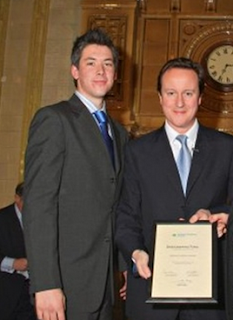 Christian May. And some bloke who they roped in to give The Great Man his award

It was pointed out by the deeply subversive Guardian that May had been associated with the Young Britons Foundation (YBF), the self-styled “Conservative Madrasa” run by Donal Blaney, head man at Griffin Law, from whence the latest unsuccessful attempt at libel bullying aimed at this blog emanated. Hellier’s predecessor as City AM editor, Allister Heath, was a well known stooge of the so-called Taxpayers’ Alliance (TPA). 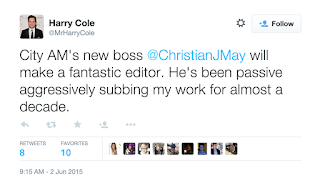 The perpetually thirsty Paul Staines and his rabble at the Guido Fawkes blog, as might be expected, were ecstatic at the news: calling the hire “a canny move”, they told “Having written hundreds of pro-business op-eds under other people’s by-line [sic], May will take over at the paper later in the summer … Allister Heath was 27 when he became the paper’s most famous editor, so far. May is 28”.

And, as Jon Stewart might have put it, two things here. Writing an op-ed column cannot be compared to editing - that’s as in editing a Real Paper, Fawkes folks - and Heath had at least six years’ editing experience when he arrived at City AM. Nevertheless, the deeply unsavoury Cole enthused “City AM's new boss @ChristianJMay will make a fantastic editor. He's been passive aggressively subbing my work for almost a decade”.

It takes very little journalistic ability to fisk Cole’s appallingly shonky grammar and iffy spelling, though. And not everyone was nearly as enthusiastic about City AM hiring a PR man whose sole connection with the likes of Allister Heath appears to be that if political ideology. Bethan Davies’ reaction was typical: “Is reading a publication for 7 years the same as you know, journalistic experience? (No)”. 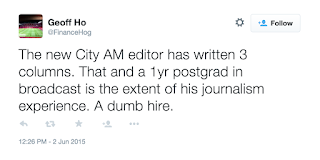 Keith Trivitt pitched in with “I'm not one to knock #PR pros, but this move seems odd: City AM names PR w/ no journalism experience as editor”, and Geoff Ho put it simply: “The new City AM editor has written 3 columns. That and a 1yr postgrad in broadcast is the extent of his journalism experience. A dumb hire”. Later, Cole was blubbing “The lamest eight words in the English language: ‘The appointment met with less approval on twitter’”. 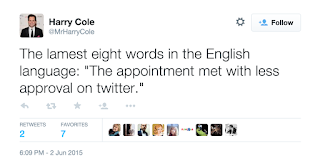 What the appointment shows is that City AM is, first and foremost, about ideology and propaganda. Having a Real Journalist (tm) at the helm is considered less important than someone who is One Of Us (to quote Mrs T). And, if Christian May is going to make a decent fist of it - which is not impossible - then he has to learn to listen. The arrogant man never learns. May must overcome his belief that he knows it all. Or he will fail.

If he doesn’t listen and learn, there will be only one outcome. Out the door - like Hellier.
Posted by Tim Fenton at 17:19