Poor Simon Jenkins. To paraphrase Winshton’s characterisation of Austen Chamberlain, when it came to rail infrastructure projects, he always played the game - and he always lost it. Thus it is that, as news comes that Manchester Airport is about to embark on a £1 billion investment plan, on the back of it being connected to the HS2 line, Jenkins decides to play Ron Hopeful and suggest the Tories cancel it. 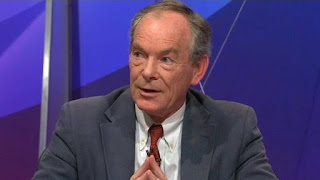 Under the headline “HS2 is not a useless railway, merely the stupidest”, Jenkins claims that “In 2010 David Cameron backed it unthinkingly, as a vague ‘alternative’ to building a third runway at Heathrow, which he had promised not to do. This bad decision was made worse when he then changed his mind about the runway”. If you’re going to attack HS2, making statements which are not true is not a fruitful way to proceed.

Marylebone, London Bridge, Waterloo, Charing Cross for four. And Euston Square station on the Circle Line will be brought into the Euston complex by the time HS2 opens. But Jenkins is off and running, unencumbered by things like facts: readers are told of “the staggering £70bn that is the likely cost of HS2” (it’s £28 billion plus a £14 billion contingency, but hey ho), and asked to “look over there” at his own suggestion. 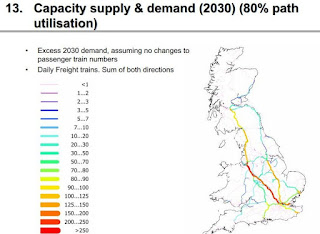 That is a high speed line between Scotland and London close to the line of the East Coast Route, for which no economic case exists. He appears not to take on board that the HS2 business case has been built up by it serving all those major cities in the Midlands, the North West, and Yorkshire, something an East Coast only route cannot hope to do. And, ultimately, he misses the whole point of the exercise.

There is some talk about network capacity, but Jenkins fails to address the elephant in this particular room. So let me put him straight. Once more, I present the Rail Freight Group (RFG) forecast for freight path demand in 2030. The capacity shortage will be at its most acute on the West Coast Main Line, followed by the East Coast. Both are relieved by the new capacity provided by HS2. It really is that simple.

Jenkins believes capacity can be otherwise provided; let him show how that is to be achieved. He will not. All he is doing is taking a contrarian stance, then filling his argument with bluster and supposition. He opposed Crossrail using the same argument - that it wasn’t really needed. Central Line commuters might like to savour that one. And now he is on the wrong side of the argument once more.

Meanwhile, Manchester Airport is on the right side. Follow the money, as they say.
Posted by Tim Fenton at 17:25

Though in fairness to him, "England's 100 Best Views" is a really first-rate book.

Never worry about the USUAL SHOWSTOPPERS
rain, floods, snow, leaves on the line

Build a 300mph sterling service, and stop poor Bazelgette rolling in his grave

Manchester Airport may be backing a goodish idea but I've a feeling that The Boy George is backing a different one which will take HS2 away from the airport area, and much more importantly, away from most of his constituents.

George and Dave have nailed their flags to the mast of the Transpennine High(relatively) Speed plan. And George issued statements months ago about building up Manchester Victoria for it. Then a bit later there was a statement about HS2 from Crewe running up to Manchester and trains continuing to Yorkshire. But the original HS2 plan uses a very cramped site at Piccadilly with no connection to the Yorkshire scheme. It looks like HS2 Phase 2 might be diverted across Barton Moss and through the Salford area to Victoria. In which case it will miss the airport. But apart from that makes a lot of sense with less expensive tunnelling (and the one that can't be avoided could serve MediaCity)and better rail connections.

And Birmingham Airport will have nailed the "new London runway" aim under Phase 1 long before anything could reach Manchester.