There is a fine line to tread for broadcast journalists when dealing with serious accidents, especially when trying to get information to viewers while not straying into punditry or rushing to judgment. And Kay “Surly” Burley of Sky News (“first for breaking wind”) just failed to tread it, in the wake of a collision on a ride called The Smiler at the Alton Towers attraction in Staffordshire a few days ago. 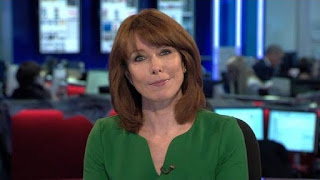 Since the accident, which resulted in four young people suffering serious injuries, stories have circulated suggesting Alton Towers management may not have been running the safest of organisations. This may be true. It may also be true that those same management will find themselves in deep schtuck as a result. That may be well-deserved. But TV interviewers are not the ones who will make that call.

This does not appear to have occurred to Ms Burley, who went off the end of the pier in no style at all when interviewing Alton Towers’ CEO Nick Varney. She wanted to know if one of the victims had lost a leg as a result of the accident, something which, at the time, had not been confirmed. Varney was not in a position to give out that information, even if he had it - not without having even more opprobrium heaped upon him, that is.

So he expressed a more general regret over the collision, replying “We are deeply sorry for the accident that happened”. Off went Kay: “I’m sure they are not interested in your sympathy at this stage. They went to have a fantastic day and they have potentially lost a limb - you won’t tell us if they have or not”.

The interview continued in the same vein, with Ms Burley constantly interrupting - perhaps she’s got her eye on Newsnight or the Today programme - and creatively interpreting Varney’s regret to pretend that Alton Towers has knowingly been running an unsafe show (that, of course, may be true, but it’s not up to her to judge). The result of her shouty self-promotion was a whopping 1,162 complaints to media regulator Ofcom.

But enough: I have some words of advice for Kay Burley.

1 Dirty Harry is a fictional character. And he wasn’t a TV interviewer. So “I don’t give a rat’s ass about your sympathy” is not a particularly fruitful way to progress an interview.

2 There’s no point in grilling someone for information that they either don’t have, or can’t give you. Repetition might work for The Inquisition of Pax Jeremiah, but all it does during the day on Sky News is reassure you that there are 1,162 people looking in.

3 Your shouty performance will not be admissible in a court of law. So it’s hardly worth your getting in a froth and dumping on Alton Towers’ CEO in the first place.

4 You’re not such a great journalist. If you were, you wouldn’t be stuck at Sky News. Which, in the absence of offers from other broadcasters, is exactly what you are.

5 Great way to frighten off interviewees, though. BBC and ITN should get that cheque in the post right now.
Posted by Tim Fenton at 12:35

Owned by Rubert Murdoch isn't it? What do you expect!

She's not a journalist, a talent, or in any way likeable as a presenter, but she does know how to act as a loyal mouthpiece to Saint Rupe. Now he's on his way out, it'll be interesting to see if Burley still has a job at Sky 'News'.