So Farewell Then Charles Kennedy

Sometimes the news is so unexpected, so unwanted, and so shocking that it takes some time to sink in: that must have been the reaction of many others apart from me this morning to learn of the passing of former Lib Dem leader Charles Kennedy at the all too early age of 55. With him has gone not merely a universally loved and admired politician - there are all too few of them - but perhaps the soul of British Liberalism, too. 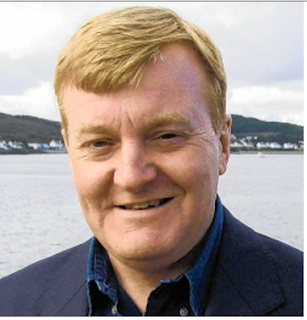 Some mistook his agreeable nature for weakness, a lack of determination: they could not have been more wrong. When the time came for the then SDP to make common cause with the Liberal Party, it took some inner steel to face down the egotism of David Owen. Kennedy had that quality, and it was fortunate for him and his colleagues that he did. He needed it again when the Iraq adventure came along.

As J K Galbraith told, “All of the great leaders have had one characteristic in common: it was the willingness to confront unequivocally the major anxiety of their people in their time. This, and not much else, is the essence of leadership”. Charles Kennedy was keenly aware of the disquiet among many in the UK at the prospect of war in the Middle East, and on the flimsiest of pretext. He was the only party leader to show that leadership.

His speech to anti-war protesters should be required reading: “The real aims - what would follow a war - have never been properly explained … International justice must include a serious restarting of the Middle East peace process … The absence of that can only fuel extremism and international terrorism … This is the riskiest moment for Britain since Suez”. And so it has come to pass. 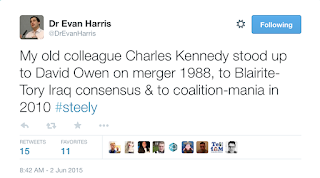 Kennedy’s willingness to listen to the concerns of ordinary people, and his determined stand against the Iraq war, brought the Lib Dems the best result for a third party in the UK since David Lloyd George and a briefly united Liberal Party secured 58 seats, and the balance of power, in 1929. Little good it did him: a year later, his MPs, now believing they were part of a Proper Big Party, ousted him from the leadership.

And there British Liberalism began to lose its way. Nick Clegg, it seems, was all too susceptible to the trappings of high office; Kennedy was the only Lib Dem MP to stand in opposition to going in with the Tories. This time, those who had stood with him over Iraq missed the point; they were seduced, as Clegg had been, by the idea of their party being in Government for the first time sine 1922.

All too many Lib Dems, Charles Kennedy included, paid the price for Clegg’s ambition last month. The party is back where Jo Grimond found it in the 1950s - able to fit in the back of a London taxi - and now it has lost the only one of its figures who could stand alongside him. With Charles Kennedy’s passing, not only has politics lost a genuinely kind man, but British Liberalism has lost its last truly great leader.

The Lib Dems were in a dark place after last month’s losses. It is a yet darker one today.
Posted by Tim Fenton at 10:12