“Towns and cities across Britain at risk of flooding AGAIN as new 80mph gale sweeps in from Atlantic (and thousands are still without power)” announced the Mail On Sunday today, and there in the article we learn “But in an exclusive interview, Basil Scarsella, the boss of UK Power Networks, which supplies eight million homes in the South East, admitted: ‘We could and should have done more’”. 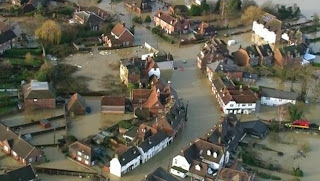 UK Power Networks manages electricity distribution networks in London and the South East and East of England, those formerly run by the London Electricity Board, Eastern Electricity, and SEEBOARD. These networks were brought together under the Aegis of EDF, who sold them to the Cheung Kong Group in October 2010, for a sum thought to be around £5.5 billion.

It did not take long for the new owners to make economies: less than a year after the takeover, UK Power Networks announced 400 job losses, with another 200 to follow in 2012 and 2013. The company confirmed “it is currently in the process of consultation with its recognised trade unions and staff representatives on proposals to improve its operational efficiency and reduce costs”.

It was claimed that “Staff who work directly on the electricity network will not be impacted”, but that was not the end of the cuts. “UK Power Networks chops tree cutting spend by 28 per cent” was the proud announcement in February last year. “Combining power line maintenance and tree cutting into one contract reduced costs by more than a quarter and lessened UK Power Networks' need to halt operations”.

That sounds, on the face of it, impressive. But a closer look reveals that the company was “in the middle of a programme to cut costs by 20 per cent”. And if that contract quoted “now gets both services for 36 per cent below the industry benchmark”, how is that achieved? How come the rest of the industry isn’t seeing the same improvement? We may now be seeing the answers.

“Mr Scarsella also conceded that householders were cut off for long periods because too many of his staff were off over Christmas. He said his company was considering restricting employees’ holidays in the future” tells the MoS. But no competent business allows too many of its workforce to be away at any one time – unless, of course, there was so little cover that the situation was inevitable.

Axing hundreds of jobs, reducing maintenance costs and then cutting costs by a full 20% on top of all that has one clear corollary, and we have seen that in Kent this past week, with some residents still without power six days after the storm hit. Cheung Kong – withdrawn five years ago from the Hang Seng index – may be getting an improved return on its investment. But this has come at a price.

Their unfortunate punters appear to be the ones paying it. That’s not good enough.

[UPDATE 31 December 1915 hours: the Independent has picked up on this story, noting that UK Power Networks, while cutting staff, made an annual profit of almost £1 billion according to its latest accounts, and managed to give its owners a £135 million dividend.

The Indy also noted that the company was "substantially funded by debt", but easily able to manage the interest payments - while also making a handsome profit, sending that bonus back to Hong Kong, and paying rather less than the headline rate of Corporation Tax. We haven't heard the last of this one]
Posted by Tim Fenton at 10:49

Well of all the things they got wrong they did at least do one thing properly, they put the letters UK in their name to avoid the press asking too many questions. Imagine if it had still been EDF and they had called it French Power. Or if this lot had called it Chinese Power - never mind the weather, there are foreigners to attack! I suppose we are lucky that the gales were coming in from the Atlantic - how many pages there would have been if they come from Europe?