EXCLUSIVE HS2 – We Should Be So Lucky

As this blog revealed on Sunday, there is an attempt being made to use the HS2 project to spend a whole load of public money on an unnecessary new station near Crewe, which would be sited well out of town. The use of a regional Quango by Cheshire East Council’s Tory leader Michael Jones for this end also endangers the gains already made by the town in securing an HS2 connection. 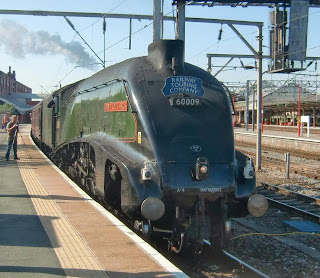 Undeterred by the growing opposition to his proposed waste of public money, Jones went right ahead with the scheduled meeting of the Cheshire and Warrington Local Transport Body (LTB) yesterday, with his hobby-horse at the top of the agenda. In this he was supported by his “rail expert”, one Pete Waterman, whose involvement in restoring steam locomotives is considered to give him suitable insights.

Yes, this is the same Pete Waterman who was a third of Stock, Aitken and Waterman, the trio who churned out formula pop in industrial quantities some years ago, to the indifference of many who wished they had not even started. He has no experience of high speed rail, the workings of Network Rail, franchising, stock provision, or much else on today’s railway. But he’s a “rail expert”.

The meeting of the LTB began and Jones attempted to hurry matters along. This was interrupted by someone from the CPRE, who gave every impression that they had read my earlier blog post. Was the proposed station 300 or 3,000 metres from the existing one? Jones was unable to give a clear answer. Then it became clear that the “300 metres” figure was between station limits, and along the tracks.

By station limits, we do not mean the platform ends, but some distance beyond that. The station entrances would be at least 3,000 metres apart. The BBC and all others who reported the smaller figure have been deliberately misled. It got worse: the man from the DfT wanted it specifically minuting that he had taken no part in the HS2 discussion. This is very bad news for Jones’ ambition.

Then it was Waterman’s turn: the rep from Warrington Council discovered that everything they had asked to be included had not. They therefore voted against Jones’ motion and will write to the Minister under separate cover. At this point, Popster Pete lost his rag and claimed that the Warrington rep didn’t understand. But, as “rail expert”, it was his job to enable others to understand.

On top of that, the man from Middlewich Town Council, who want to see a reinstatement of their rail service, discovered that Jones’ promise of including it in the LTB submission was an empty one. His unhappiness was compounded by the thought that spraying money up the wall on Jones’ boondoggle would adversely affect the Middlewich campaign. Unhappy faces all round.

So now we have two competing clowns in the ring. We should be so lucky (etc).
Posted by Tim Fenton at 17:03

I saw Waterman on BBC breakfast a few weeks ago reviewing the Sunday papers, including an article about the East Coast Line which he completely misunderstood. This government-owned service actually makes a profit, but somehow Pete completely misunderstood or misinterpreted the article and thought the line makes a loss. So then he started banging on about "privatisation good,nationalisation bad"

In the spirit of "I'm Sorry I haven't a Clue", can I suggest a round of the Michael (aka Kim-Il) Jones Songbook, solely featuring songs from the Waterman stable.

I Should Be So Lucky (Kylie) - yes Michael, we know

Never Gonna Give You Up (Rick Astley) - go on give it a try!

Wouldn't It Be Good (Nik Kershaw) - no it would not!

This Time I know It's For Real (Donna Summer) - something we're all too afraid of...

Pass the Dutchie (Musical Youth) - or rather Pass the Duchy, we need some of it's land to get the Stoke trains in...

Roadblock (Stock Aitken Waterman) - I think we may be seeing one or two of these...

Tragedy (Steps) - it certainly is

On a railway thread...

Did you really miss Kylie Minogue - The Locomotion... Loco I grant you...