So Farewell Then Ronnie Biggs

More than fifty years after he had a walk-on part in The Great Train Robbery, the name of Ronnie Biggs still held a certain cachet for the press. Quite why this should be is mystifying: Biggs, who has passed at the age of 84, had very little to do with the robbery except to recruit a replacement train driver. In this he was exceptionally inept. But he was banged up with the others, and thus the legend. 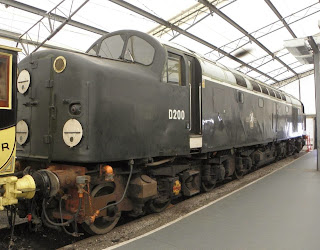 What Ronnie Biggs' driver couldn't move: the mail train locomotive was similar to D200, seen at the National Rail Museum. All 135 tonnes of it

So Biggs was not involved with the selection of the train, the 1850 hours Travelling Post Office (TPO) from Glasgow Central to London Euston, which had in its consist a High Value Packages (HVP) coach. The HVP vehicle would normally have been carrying around £300,000, but the robbers chose the Wednesday following a Glasgow Bank Holiday. There was over £2.5 million on board.

The gang managed to mask over a green (clear) signal at Sears Crossing near Cheddington and rig up a phony red one. This stopped the train. But Biggs’ replacement driver had never handled a main line diesel, and was unable to move the locomotive. That was the sum total of his contribution. But he did get a sixteenth of the loot, and thus he got 30 years along with the ringleaders.

Was that worth all the effort that has gone into romanticising Biggs? Not a chance. But his escape from Wandsworth jail – over the wall using a rope ladder to a furniture van parked outside – and subsequent flight via Paris to Australia and then to Brazil, before the days of inexpensive flights to such locations, fuelled a welter of column inches. And he fathered a son in Brazil, so more cheap and easy copy.

And so the occasional stories, with their paydays for Biggs, might have continued, were it not for the press slowly losing interest, and his increasingly poor health. So back he came in 2001 to give the UK the dubious benefit of looking after him in his old age. A less than impressed and grateful justice system caused him to be nicked on arrival and banged up to complete his sentence.

All of us lucky taxpayers then enjoyed the privilege of knowing our hard earned dosh was helping to keep Biggs clothed and fed. It was claimed he could have got the health care in Brazil, which sentiment gives off a seriously strong whiff of bullshit. And if he was in any way grateful for the generosity of the welfare state, he had a strange way of showing it, as was seen earlier this year.

Biggs, by now wheelchair bound, greeted his former pals in the press who had come to report on the funeral of Great Train Robbery mastermind Bruce Reynolds with a two-finger salute. Defiant to the last, maybe he was a character, another of those diamond geezers. More likely he was an incompetent criminal who met Reynolds while both were in jail and therefore got lucky.


Ronnie Biggs certainly wasn’t worth the hype. Maybe the hacks will remember that.
Posted by Tim Fenton at 10:49

It's just a long time fascination of historians, media and the public with "lovable rogues".

Biggs is just a more up to date version of Dick Turpin or on a much bigger scale, and who only robbed Johnny Foreigner, Sir Francis Drake and Clive of India (although the latter was by some accounts not quite so lovable)?

At least we've been spared a Richard Littlejohn obituary. He's on holiday.