As I noted recently, the news that GCHQ in the UK and the NSA in the United States have been snooping on anyone they can target – including those one might regard as allies – has broken out beyond the deeply subversive Guardian and the other news sources that have been running material from former NSA contractor Edward Snowden’s trove of material. 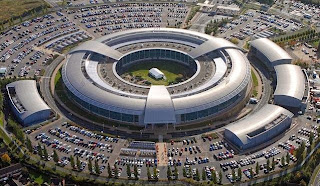 Earlier in the month, it was Kevin Maguire at the Mirror who expressed his irritation at the spooks’ easy ride, and the deference shown their bosses by compliant and frightened politicians. Now, with the news that the Israelis – that would be another Government that we are routinely told is our friend – and EU trade officials, as well as charities, are being targeted, other papers are joining in.

And the very worst news for the spooks is that one of these is the Maily Telegraph, normally a compliant conduit for MI5 and MI6, as it was when trying to advance the idea that the Guardian’s revelations had endangered “National Security” by giving a platform to Alex Carlile, a well known GCHQ apologist. Not any more: “NSA and GCHQ targeted Israelis, charities, EU chief” readers were told today.

Another paper that has previously given the Guardian both barrels for supposedly aiding and abetting the enemy, the Daily Mail, has also run the latest news on spook related excess: “British spies targeted the Prime Minister of Israel, and other senior figures in the Israeli government, according to leaked documents ... GCHQ ... had targeted an email account belonging to Ehud Olmert while he was in office”.

There were others: “The agency, working with the American NSA, also targeted defence minister Ehud Barak and Yoni Koren, his chief of staff, according to GCHQ documents”. Barak was not surprised: he “declined to comment on the latest information, but has previously said he took it for granted that he was under surveillance”. The vice-president of the European Commission was also a target.

The EC was not impressed: “This is not the type of behaviour that we expect from strategic partners, let alone from our own member states”. Well, quite. So now the BBC, which has reported the latest developments, and the Guardian are no longer alone: the story is steadily taking hold across the fourth estate. Bad news for the “non-story” squad, and those who want the Guardian prosecuted.

Just like phone hacking, it turned out to be a real story. No surprise there, then.
Posted by Tim Fenton at 17:20

I don't tweet or facebook and do not have an email address for you and this is not a comment on your latest blog
Just want to say I have really enjoyed your stories throughout 2013. Thank you very much and we here wish you and yours a very happy Xmas and a good new year.
Regards
David and Shirley
davedew@ntlworld.com

May I echo David & Shirley's sentiments above?

I do however have one reservation about the latest blog - no mention of her who likes to be named (and possibly secretly enjoys being shamed?).

You're both too kind.

Lou ... you know who will reappear in the New Year. When is not known, but the tendency to foot in mouth is as night following day, so it's bound to happen.

To echo the comments above, have a good Xmas Tim - you've worked hard this year and earned it :) Don't let the buggers get you down!