Glasgow Helicopter Crash – What We Know

The crash of a Police Scotland helicopter into a crowded Clydeside bar, the Clutha, just before 2230 hours on Friday night, has resulted in several deaths and many serious injuries. But as always with the early days of the investigation that follows from such incidents, there is much that is not known about what happened. That has not deterred Mail Online from telling the world that they have the answer. 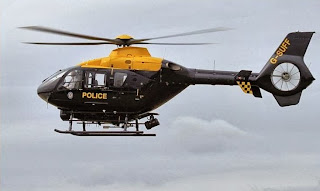 A Eurocopter EC135 in Police service: this example works in the West Midlands

“Chopper grounded over cracks in blades: Emergency alert issued over model of crashed helicopter a YEAR ago because of 'safety concerns'” screamed the headline. So were all Eurocopter EC135s grounded? “The model of helicopter that crashed on Friday was grounded last year amid safety concerns”. Sounds like it. But the cracks found in a rotor blade during a routine inspection did not cause around a thousand aircraft to be taken out of service.

“It led to air ambulance operators across the UK grounding helicopters as a ‘precautionary measure’, although they were later cleared to fly”. So more scaremongering. And “an investigation had found problems with deformed safety pins which ‘if not detected and corrected, could lead to further crack propagation”.

That means it was precautionary action – the kind that minimises known risks and thereby improves air safety. So another misinformed example of the Mail wading into an area where its hacks know next to stuff all. Meanwhile, as emergency services continue the delicate balancing act of extracting the helicopter from the building, while identifying the victims, the facts to hand can be examined.

That the ‘copter came down where it did suggests that the pilot was unable to exercise any control over the situation. There was no fire, which could point to fuel starvation, but pilots are trained to be able to glide and exercise control while doing so. In any case, operational discipline dictates always keeping a safe amount of fuel on board in case of emergencies.

So that leaves some kind of catastrophic failure: witnesses have talked of the craft “falling like a stone”, suggesting a failure in the main gearbox. If the helicopter was also spinning as it fell, that would almost certainly confirm it, and in that scenario there would be nothing that the pilot could do. There was, apparently, no other aircraft in the vicinity at the time, so no external cause.

The AAIB has already started its investigation: their findings will tell us what happened, and what can be learned to prevent a recurrence and therefore continue to improve air safety. Meanwhile, the thousand or so Eurocopter EC135s will continue to operate safely. And the Mail will no doubt continue to seek yet more attention by claiming to have found the answer.

What we do know is that we do not have that answer as yet. End of story.
Posted by Tim Fenton at 15:13

The Fail initially claimed there had been an explosion and a fireball - quoting unnamed witnesses. Even though the onsite pictures (stolen from twitter as usual) showed that they were lying.

10:1 on a tail rotor failure of some description

At least they are speculating on technical grounds. I just assumed the headline would be that it crashed because it had Euro in the name...