After Tottenham Hotspurs chairman Daniel Levy summoned the club’s manager André Villas-Boas to a meeting on Monday morning, few were surprised when the result of that encounter was that Villas-Boas became the latest Spurs manager to get the sack. The club had just been trounced 5-0 at home by Liverpool, and the previous month had brought a 6-0 drubbing by Manchester City. 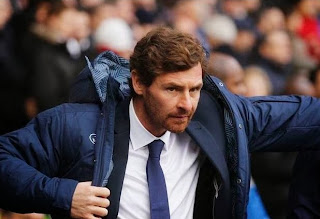 So there was the customary recollection of the Portuguese’ brief managerial career: his reputation was said to hinge only on one good season at FC Porto, and the Primeira Liga talked of in unfavourable terms. Well, Villas-Boas’ one-time mentor and predecessor at the Estadio do Dragão, José Mourinho, was only there two and a half seasons, and he hasn’t done too badly since.

Moreover, Porto was not Villas Boas’ first managerial post: that was at Adadémica de Coimbra, where he rescued the team from a winless position at the foot of the table and guided them to safety. And when you look at his record at Spurs, especially when compared to some of the club’s supposedly best recent managers, he comes out comfortably above them all.

Of those who have managed more than two seasons at White Hart Lane lately, George Graham managed a win percentage of 33.67, Glenn Hoddle – who is being touted as a replacement boss – achieved 35.96, Gerry Francis a slightly better 36.13, and Martin Jol 41.59. This was comfortably exceeded by Harry Redknapp with 49.31 and Villas Boas with 53.70, and for this they both got the sack.

All of which brings us to Levy, who is now coming under the spotlight for a number of his decisions, not least that of employing a Director of Football, because they do it on the continent. One can only imagine what the likes of Alex Ferguson would have made of such a move, and not having anyone in that role didn’t stop Man United racking up all that silverware during his tenure.

There will be other questions: whose choice were all the players brought in during the close season, after Gareth Bale went to Real Madrid, generating a reported £85 million? If Director of Football Franco Baldini was behind those moves, why is he still in post? And why is the managerial merry-go-round not generating any trophies for a club that has won nothing in the past five seasons?

Whoever succeeds Villas-Boas will be Spurs’ eighth manager in 12 seasons. During that time, their bitter North London rivals Arsenal have had just one. And they have done rather better: in fact, the Gunners right now sit at the top of the Premiership table. Man United have only got a second in that period because Ferguson retired. The only other Premiership winners came through having money thrown at them.

And while Spurs offer neither continuity nor megabucks, they won’t join them.

[UPDATE 19 December 1300 hours: it seems my question as to who chose all those new players that arrived at Spurs in the close season was near the mark. The Mail has claimed that Villas-Boas did not want four of them, and was overruled by Levy and Baldini, making the sacking an even more dubious business.

Added to all that is the strange decision by caretaker boss Tim Sherwood to change the style of play for last night's League Cup quarter final against West Ham, only to see it backfire as his team conceded twice in the last ten minutes and lost. Sherwood appeared all at sea afterwards, and isn't even sure if he will be in charge when the team play their next Premiership tie.

In the circumstances, Spurs have little to blame their outgoing manager for, and everything to lay at the door of their chairman]
Posted by Tim Fenton at 12:55