When this blog commented on the news that “Michael Jones, Cheshire East Council leader, said he had held ‘positive talks’ with Network Rail about building the new [Crewe] station 300 metres from the existing one”, which was accompanied by talk of a monorail (no sniggering please, Simpsons fans), it looked like a silly way of generating copy. It wasn’t. It was something far more serious. 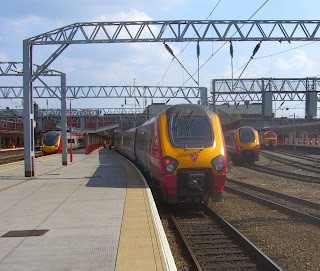 That distance was missing a zero from the figure: it is actually 3,000 metres. The intention is to resurrect the attempt to rip the railway station out of Crewe and dump it two miles to the south in an area largely uninhabited at present. It is a scheme that saw so much opposition first time round that it was seen off relatively easily, and this time it is being slipped through on the quiet. Until now. 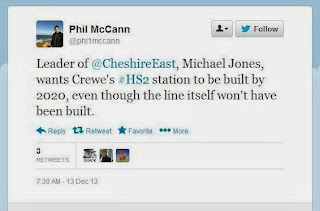 “Leader of Cheshire East, Michael Jones, wants Crewe’s HS2 station to be built by 2020, even though the line itself won’t have been built” observed Radio Stoke’s Phil McCann yesterday. But the HS2 proposals as they currently stand do not feature a station on HS2 at Crewe: there would be a connection to the new line, with trains off HS2 to Liverpool and Chester stopping at the existing station.

Moreover, if there were to be a station actually on HS2, it would have to be well to the south of that currently in use, as at that point the new line would be in tunnel some way beneath the surface. And any change to the proposals already well progressed would mean everything for the route immediately south of Crewe would have to be ripped up and restarted from scratch. At significant extra cost.

So what is Jones’ game? Ah well. He is using the Cheshire and Warrington Local Transport Body (LTB) as a vehicle, with its response to the HS2 consultation, including the proposal for not just a connection to the new line at Crewe, but a new station, to be presented tomorrow. The author of the report, Andrew Ross, was involved in the abortive 2008 plan.

The very first item in the proposition being put by the LTB is “A new station and railway track layout at Crewe delivered by 2020 which would accommodate HS2, and deliver a fully integrated Hub Station, including dedicated HS2 trains”. The cost of this – in the hundreds of millions of pounds – is being justified on the basis that “the signalling needs doing anyway”.

Even deducting the cost of resignalling, the bill would still be in the hundreds of millions, the station would no longer be in Crewe, we would be left with the false promise of a pie-in-the-sky monorail, and the business case for HS2 would take a significant dent, potentially losing Crewe the connection it has already won. It should surprise no-one that Jones has not seen fit to ask the electorate what they think.


This smacks of abuse of power and potential corruption. And that’s not good enough.
Posted by Tim Fenton at 17:08

There is a more famous name from the 2008 scheme involved here. Non other than Pete Waterman, him famous for being Kylie's produced before she was really famous. In 2008 he was just a self appointed mouth telling various people how to spend their money. But now, he is 25% of the voting power on the new iQuango that is the Local Transport Body (is it only 3 years since iDave launched his bonfire of the quangos - yet another Coalition idea shot down in flames). Did I miss something - when did any of us vote for that?

So on Monday afternoon. 1 councillor from CEC, who doesn't represent Crewe, plus 1 from Warrington and 1 from Chester & West will join him in voting for a policy that would change the face of Crewe. None of the elected councillors have been consulted, none of the people - and as far as I can make out non of the regional Train Operating Companies!