Whoever is operating the @toryeducation Twitter feed – widely believed to be Dominic Cummings – certainly gave the impression yesterday afternoon that some kind of illegal substance – probably administered in conjunction with a long and very liquid lunch – had been taken, as Channel 4 News presenter Jon Snow became the latest target for an onslaught of partisan abuse. 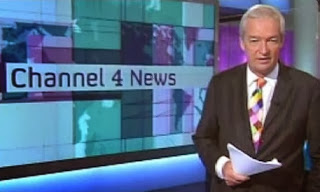 There was, as so often, no reason for Cummings to single out Snow, and no excuse for the plainly nasty tirade that followed. All that the presenter had done was to express a mixture of disbelief and frustration that no Government minister was prepared to appear before his inquisition to discuss the results of the Pisa tests, which showed the UK not improving on its previous showing. 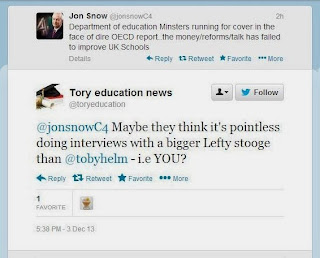 Dom had an explanation: “Maybe they think it’s pointless doing interviews with a bigger lefty stooge than @tobyhelm – ie YOU?” he snarked. There was no pause to consider that it might be to escape questions as to why the UK was doing less well than Poland, Germany – or, indeed, Vietnam, despite three and a half years of leadership from the great Michael “Oiky” Gove. 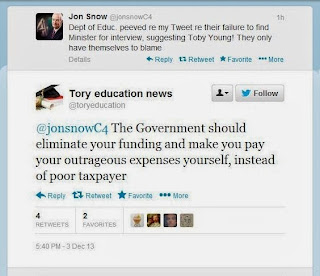 And that Tweet was only the opening shot, as Snow found when he noted that the best the Tories could do was refer him to the loathsome Toby Young. “The Government should eliminate your funding and make you pay your outrageous expenses yourself, instead of poor taxpayer” he ranted. Well, at least we were doing better than Sweden, but that was not good news for his boss. 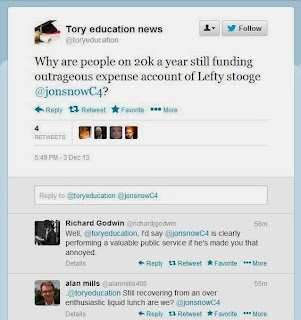 Still Cummings flailed away: “Why are people on 20K a year still funding outrageous expense account of lefty stooge @jonsnowC4?” he demanded. He could have asked himself why Sweden, from where the much-vaunted Free School concept has been imported, has fallen down the Pisa rankings rather faster than the UK. Some of the for-profit companies involved are facing financial difficulties. 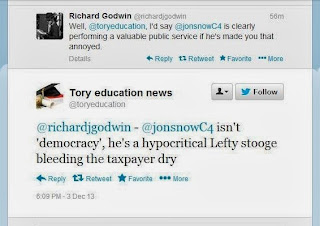 But Dom had other things on his mind: “@jonsnowC4 isn’t ‘democracy’, he’s a hypocritical lefty stooge bleeding the taxpayer dry”. Pot, meet kettle. Perhaps Cummings can explain why his boss “wants a Silicon Valley ‘startup culture’ in UK schools”? That would be importing something from a country that was a full ten places behind us on the latest Pisa rankings. 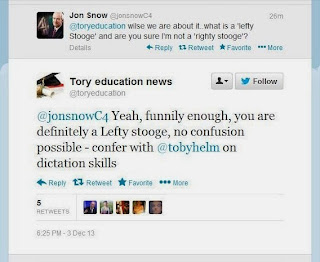 No, he wants to keep sniping at Snow: “Yeah, you are definitely a lefty stooge, no confusion possible – confer with @tobyhelm on dictation skills”. Attaboy Dom, never mind that all those taxpayer funds that are being poured into “Oiky’s” pet Free Schools project, and into the pockets of Yourself Personally Now, are failing to improve the standard of education in the UK.


pt has been imported, has fallen down the Pisa rankings rather faster than the UK.a
But good to see someone demonstrating just how seriously Tories take education.emocracy'  other things on his mind: "ties.

[UPDATE 1635 hours: Cummings was, it seems, not finished with his snarking, and nor had the effect of that lunch worn off, when he returned to snipe at Snow later in the day. 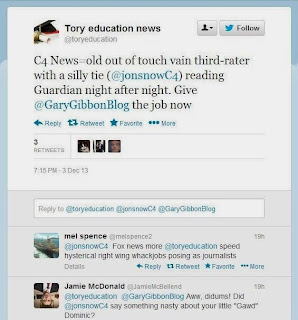 Firstly, he suggested that Snow was no longer up to the job and should make way for another member of Channel 4's team. This served only to attract the attention of rather a lot of Twitter traffic asking if there were perhaps a more productive way of using public funds. 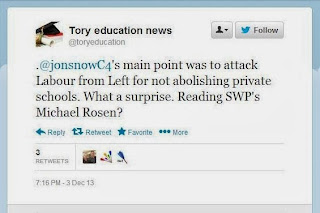 Then he suggested that Snow had been influenced by children's author Michael Rosen, whose ability to write well clearly upsets Dom. So out came the tired suggestion that Rosen has something to do with the SWP, which he does not.

Cummings is clearly sitting in a very draughty glasshouse right now. There he is, trousering significant sums of taxpayers' money, giving back little more than ranting and raving, going out on the sauce in works' time, and then blatantly breaking the SpAds' code of conduct on return to his desk. Small wonder that Andy Coulson vetoed the SOB]
Posted by Tim Fenton at 10:36

The "Why are people on 20k a year still funding" line is really weird. I mean they're paying Cummings's wages at the moment which is not doing anyone any good as far as I can tell, they've also funded the various corrupt fre schools that have been exposed in the media recently...