So Farewell Then Katie Hopkins

Some pundits gain notoriety for being argumentative. Others become infamous for being contrarians. But it is a rare breed that combines both, and then inserts foot in mouth so clumsily that even the daytime TV shows finally call time on them. Winning the latter award unchallenged this week has been motormouth supreme Katie Hopkins, signing off with a snark at the saintly Nigella. 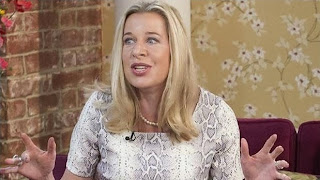 Earplugs at the ready

Ms Hopkins, it has to be admitted, is a smart and presentable woman, but any superficial attractiveness instantly evaporates the moment she opens that North And South of hers. Instead, out pours a torrent of snobbish, starchy, unthinking, inconsiderate and intolerant bile, laced with the kind of crashing ignorance that one might think absent in someone calling themselves a businesswoman.

So “geographical” Christian names are bad – but she has a child called India. Tattoos, she declares, mean someone is an “attention seeker”. She doesn’t have any. And, as for poor Nigella, she is asserted to be “a self-confessed drug-taker, spendthrift, and a self-obsessed flirt determined to show other women they were imperfect”. Yes, it wasn’t Saatchi’s fault after all!

So go on, Ms H: “Nigella made every mother in the country feel less than perfect ... She made us feel like we could never meet her standards, we could only ever watch and wonder”. Shine a light, it was only a cookery show. And the Mail is not impressed: “Hopkins ... accuses the mother-of-two of using drugs in front of her children, though there is no evidence to suggest the allegation is true”.

The Dacre doggies don’t like her: “Hopkins also suggests the TV chef has 'become separated from reality', but that statement seems highly hypocritical from the woman who says she hates children with geographical names, though her own daughter is called India. But in the whole piece, Katie's greatest victory seems to be that her own husband no longer fancies Lawson, which sums up the envious tone of her attack”.

And the Mail, more significantly, isn’t the only media outlet that has turned against the former Apprentice contestant turned professional foghorn: following a comment about Scottish life expectancy that coincided with the Glasgow helicopter crash – an act so tactless that she was, for once, prevailed upon to apologise for it – her access to the ITV’s This Morning sofa has been axed. Good.

The Hopkins departure may also have been hastened by an online petition signed by tens of thousands of those who had by now had enough of her unpleasantness. Will she retain a berth on Channel 5’s Wright Stuff? Well, they’re desperate enough to invite the likes of (yes, it’s her again) Nadine Dorries to sound off in her usual inimitable fashion, so maybe they will. Few will bother to tune in.

Yes folks, there goes intolerant loudmouth Katie Hopkins. On her way ... out.
Posted by Tim Fenton at 17:06

I hate her. The Mail hates her. I hate the Mail.

The enemy of my enemy is my meta-enemy.

The Wright Stuff have form when it comes to making fun of Scottish tragedies. Back when the Liam Aitchison murder was first on the news they thought it hilarious to do the Taggart 'there's been a murder' in fake 'scottish' accents. Racist scum probably welcome Katie Hopkins as one of their own.

I find it works.

Ignore both. I find that works.

I think I covered both well there. Ignorance is bliss - double the value.

(Sorry problem with the robot cruncher!)