Every so often a paper or website comes out with a piece that is not immediately followed up by other sources, for the simple reason that it has been deliberately placed, using a compliant conduit to make a point, deliver the required message. Standing out like the proverbial sore thumb today is the Maily Telegraph, with “David Cameron prepares 'nuclear option' on EU referendum”. 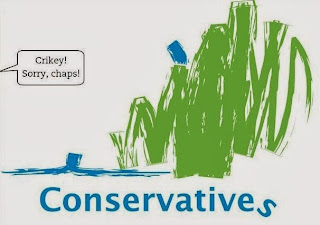 What might this mean? “David Cameron is preparing to use the Parliament Act for the first time in a decade in order to force the EU Referendum Bill into law before the next election, the Telegraph has learnt”. Note that the Tel hasn’t been told, or informed, and has not heard this expertly tailored flannel, clearly calculated to win back voters from UKIP and cheer the dwindling band of Tory activists.

But perhaps Matthew Holehouse, lead author of this magnificent piece of churnalism, can name one MP or party official prepared to put their name to it? One jests: all is couched in suitably off-the-record terms as readers are told “Mr Cameron unveiled the plans at a meeting of the Tory backbench 1922 committee”. This is then relayed to the Tel by “One MP present at the meeting”.

“The Prime Minister is showing that he means business and that he will get it on the statute books ... It shows that they really, really want it to happen. It also shows the Lords that they can’t mess with it ... That wasn’t expected. It is significant and means that the bill will be on the statute [books] before the next election”. The only surprise is that this mystery MP didn’t finish with “so vote Tory”.

Where the Telegraph gives the game away is partly by confirming that it’s a UKIP bashing piece: Young Dave is quoted as saying “They want to destroy the Conservative Party. They are not a friendly bunch that we can walk into coalition with. They want to take your constituencies and your voters”. Well, this is what he was “understood” to have said.

And partly it is that Holehouse ignores the gaping hole in his own logic: there’s stuff all point invoking the Parliament Act to short-circuit the Lords out of it if you can’t get it through the Commons in the first place. Someone at the Tel has forgotten that the Tories do not command a majority there. Not all Tories subscribe to the referendum paranoia that has taken hold in the party.

As with the spooks getting their copy into the public domain on the Snowden revelations, the former paper of record has allowed itself to be manipulated, this time by frightened Tories, who have instead broadcast to anyone who needs to know that the party is once again obsessing and fracturing over Europe, the issue that did for Margaret Thatcher, and hobbled “Shagger” Major.

And it won’t do UKIP any harm at all. Hardly worth their while bothering, then.

[UPDATE 21 December 1150 hours: backing up the Tel's dubiously sourced piece has come a post to the bear pit that is Telegraph blogs from our old friend Dan, Dan The Oratory Man. Hannan is almost beside himself with enthusiasm as he tells "This changes everything: David Cameron will ram the In/Out referendum through using the Parliament Act".

His only citation, to no surprise, is Matthew Holehouse's article. But he's sure of his ground: "It would be outrageous for Eurozealous Lib-Lab peers to talk out a proposal for which there is overwhelming popular support". So it's about getting some of those disgruntled voters back, and Hannan then confirms that it's really all about seeing off UKIP.

"Oddly, though, the loudest UKIP supporters - those who comment most frequently on Twitter, and who will doubtless be in full voice in the comment thread below - are still not satisfied". Yeah, those commenters are wrong, and it's another of those rotten Twitter campaigns that are only right when Dan says so.

Hannan looks to rally the troops, but ends up effectively admitting that his party is shipping support to Nigel "Thirsty" Farage, it can't do anything to persuade those voters to come back, and the Tories' membership is at rock bottom. Hardly worth his while sounding off in the first place, was it?]
Posted by Tim Fenton at 13:26