This blog has had a good laugh exposing the ridiculous claims made in front page Daily Express splashes by hack Nathan Rao, which predict some kind of extreme-weather Armageddon, only for reality to intervene soon afterwards. But all has now turned rather more serious, after a real weather forecaster lost patience with Rao and the Express man laid claim to a professional status he does not merit. 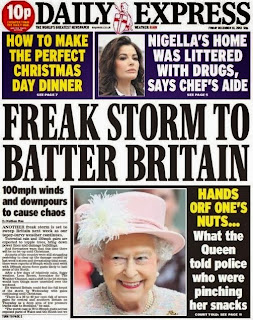 The man expressing his dissatisfaction at the Express’ constant diet of weather horror stories is Liam Dutton, who now has a berth at Channel 4 and is, as one might expect from someone who has done his time at the BBC and studied at the Met Office, a trained meteorologist. He could be observed earlier this week giving out practical information to commuters on the foggy conditions in London. 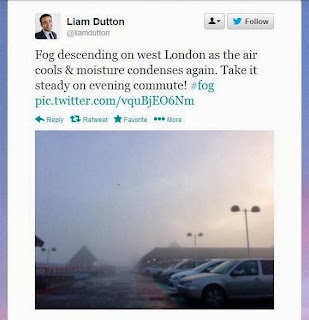 Then came his comments on the Express: “Just an attempt to gain publicity. I’d be more concerned about getting [the] forecast right ... I wonder if they promoted that Tweet to try and inform us of bad weather or to sell more newspapers”. This was followed by the observation that Rao had already called December’s weather wrong. Channel 5’s Julian Druker tried to make a dispute out of it. 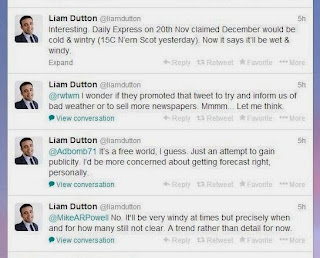 After Dutton observed “when you compare the predictions to reality, the disparity can’t go unnoticed”, Rao said “Can we call a professional truce?”, which is just taking the piss. What kind of professional connection he claims to Liam Dutton, or to any other genuine forecaster, is unclear, and one look at Rao’s latest two articles shows why he can’t claim to be in the same league. 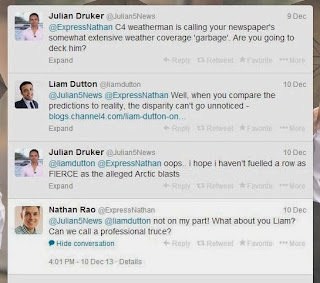 Professional? Nathan Rao? Get out of here

Yesterday, readers were treated to “The Christmas from HELL: Biggest winter storm EVER to wreck holidays for millions in UK”, and “Hurricane-force gales and torrential downpours will lash the country at the start of Christmas week”. Where would this weather originate? “a series of 'frenzied' storm systems - which have lined up in the south Atlantic”. We don’t get our weather from the South Atlantic, Nathan.

Today is little different: “Freak storm to batter Britain: 100mph winds and downpours to cause chaos”. This was “expected to topple trees, bring down power lines and damage buildings”, although the Met Office cautioned “there is a risk of gales and rain. However, it is too early to predict”. Rao once again relies heavily on Exacta Weather and Vantage Weather Solutions – two discredited quack sources.

No professional forecaster would rely on them. And nor would they duck my question as to whether he is able to interpret a synoptic chart (pressure chart if you like) or a jet stream chart. Nathan Rao may be a willing servant of Richard “Dirty” Desmond. He may submit decent copy. But he should never, but never, claim any professional competence as a weather forecaster. Because he does not have any.

Liam Dutton is right to question the Express’ forecasting. Because it’s crap.
Posted by Tim Fenton at 16:53

Liam Dutton isn't the only one. Paul Hudson, BBC forecaster for Yorkshire area, did a blog about the Express lies in mid November.

Quote from his web site.
"How about a service which produced first-class copy, complete, accurate, polished and well-written enough to go straight on the page?

With this idea in mind I resigned from my post as consumer affairs editor and set up Nathan Rao Media."

I especially love the "Accurate" bit.

Reading on, you come to the real reason why he creates such egregious copy:

"During the past year more than 13,000,000 web users have read my articles and I have had more hits than any other contributor to the paper."