The recommendation for which no crystal ball gazing was required has finally been made by Howard Davies and his team: a third runway at London’s Heathrow Airport, costing more than £17 billion, plus the less than trivial matter of another £5 billion to improve transport links, the demolition of 800 homes, and years of fun while the M25 is put in tunnel, has been interestingly called the best option. 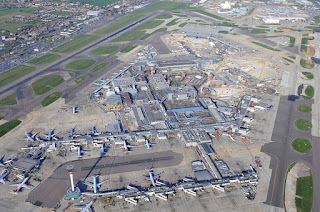 This largest of hot potatoes has been immediately bodyswerved by all local Tory MPs: Zac Goldsmith maintains that he will resign if it goes ahead, a position which is absolutely consistent with his previous opposition to the idea. He claims five cabinet ministers are also opposed; one of those would be Justine Greening, MP for Putney, who is also adamantly opposed to Heathrow expansion.

And then there is London’s increasingly occasional Mayor Alexander Boris de Pfeffel Johnson, who also says a third Heathrow runway will not happen, and that, to no surprise at all, a new Airport should be built out in the Thames estuary, proving that he was right all along. Meanwhile, buffoon Michael Dugher is attempting to make hay for Labour, while not saying what his own party would do.

So there will be plenty of spectator sport available watching mainly Tory politicians offloading that hot potato, perhaps favouring Gatwick, where a new runway would “only” cost £7 billion, or just punting if off in the direction of the nearest long grass. But do we need more airport capacity? Proponents of expansion point to Schiphol, Charles de Gaulle, Frankfurt and Madrid Barajas, saying we must have one like those.

Strangely, no-one points across the North Atlantic at New York, where the aviation load is spread around JFK, La Guardia, and Newark. No-one stops to think that we could improve transport links to and between Heathrow, Gatwick and Stansted, or that the HS2 project will bring Birmingham and Manchester Airports, both already rail and motorway connected, into the mix. Manchester has capacity; Birmingham is being expanded.

As Adam Bienkov at Politics Home has pointed out, apart from Heathrow, which is politically, shall we say, difficult, the only UK airport likely to suffer from a shortage of runway capacity in the foreseeable future is Gatwick. Fine, build the runway at Gatwick and then make sure there are direct rail links in place to transfer people, goods and services between the three main London Airports.

Press on with HS2 and thereby give London faster access to Birmingham and Manchester Airports. Make better use of the capacity the country’s Airports already have. Making Heathrow even bigger may appeal to some, but it’s a sodding awful place to get to, get around, and get through. Here in the North West, with easy access to Manchester, Birmingham and Liverpool airports, Heathrow is somewhere you don’t need to go.

Davies needs only to drop his hot potato on the politicians; they, though, need to act.
Posted by Tim Fenton at 10:54

We really need to get over this London-centrism. London is important because it's London, therefore everything should be in London. Circular bloody reasoning.

If only they could break the cycle. Expand Manchester, Brum or Liverpool or even bloody Doncaster. Actually do something positive to create the 'northern powerhouse'. Gah!

There will be no displacement of London-centrism, or, as I prefer to call it, corrupt shit-hole bias.

There's too much money to be lost by oligarch interests. Why do you think Britain (and much of the US) was deindustrialised? Why bother with a fair society when you can gouge profits in Eastern, Central/South American or African sweat shops, where, if any workers step out of line they can be murdered without second thoughts of justice?

Ultimately, why do you think Canary Wharf was turned into the World's major money-laundering centre after Switzerland and Wall Street?

It would help if the politicians we send to the shit-hole actually had guts enough to represent the people who voted for them. Instead, we get gobshite careerists like Alan Milburn, Frank Field, Tony Blair, Nick Clegg and Louise Ellman.

So don't hold your breath, Andy. But good luck anyway.

It's worth remembering that the amount that either a Heathrow or Gatwick extension will cost the taxpayer is GBP0: they are privately funded developments. The issue is planning approval, not finding the money.

Why do we need any new capacity at all? This report assumes a doubling of air travel by 2050. Currently the increase is pretty much flat. We should managing that with, say, a 'frequent flyers' tax so that we don't have to build another damaging un-necessary runway.

Heathrow Expansion is basically about taking aviation away from foreign "hub" airports. At the moment lots from eg Manchester fly to Schipol and change to destinations not feasible from Manchester. The hope is to get them flying via Heathrow instead. This is where a lot of the extra traffic would come from.

I don't expect Manchester is very bothered whether it changes at Heathrow or Schipol.