Army Not Being Deployed No Shock

As the right-leaning part of the Fourth Estate gets itself into an even bigger froth than yesterday, because the law enforcement agencies in Britain and France have not immediately sorted the refugee problems in the Calais area in order for all those hacks and pundits to go off on their holidays, stories are beginning to circulate suggesting that the Army is about to be deployed in response to the crisis. 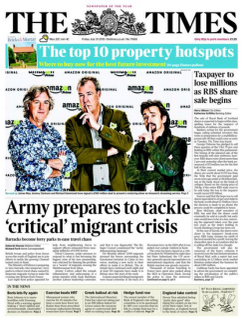 The thought enters that perhaps the situation is so bad that not only are all those hacks unable to drive over to France without being reminded of the refugee crisis across Europe, but also that supermarkets around London may be be running low on organic pasta and artisan Italian olive oil. The hardship being endured by comfortably remunerated journalists clearly needs drastic measures to be taken. 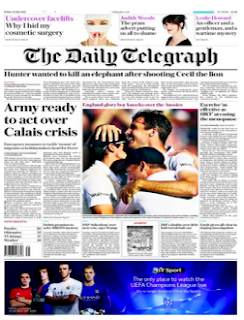 So it is that the allegedly upmarket Times has told its readers “Army prepares to tackle ‘critical’ migrant crisis”. Yes, the troops are coming, and just to prove that this is A Really Serious Story, the Telegraph concurs: “Army ready to act over Calais crisis”. But then another thought enters: what exactly are they going to do, unless Young Dave and his jolly good chaps are about to approve an invasion of France? 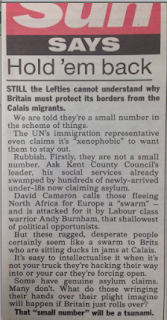 Well, if the Sun is to be believed - yes, I know that’s a big ask at the best of times - they could be used to hold back an alleged “Tsunami” of not only migrants, but rotten lefties too. In a suitably intemperate editorial titled “Hold ‘em back”, readers are told “STILL the Lefties cannot understand why Britain must protect its borders from the Calais migrants”. We hear of “Brits who are sitting ducks in jams in Calais”.

The ranting knows no bounds: “It’s easy to intellectualise it when it’s not your truck they’re hacking their way in to [the Murdoch press knows all about hacking, of course] or your car they’re forcing open … Some have genuine asylum claims. Many don’t. What do those wringing their hands over their plight imagine will happen if Britain just rolls over? That ‘small number’ will become a tsunami”. And to that I call bullshit. 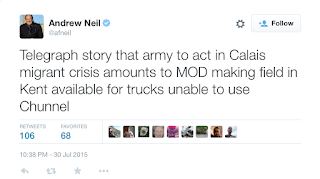 As an example, there were almost half a million asylum applications across Europe in 2013. Germany took well over 120,000. France took 65,000, and Sweden 50,000. The UK let in around 30,000 - far less per head of population that all those other three, especially Sweden. Of the approximately 150,000 arriving at Europe’s southern borders this year so far, around 3% have made their way to the Channel.

In any case, as Andrew Neil discovered - this has since been confirmed by the deeply subversive Guardian and the BBC - the only Army intervention so far has been to open up MOD land to accommodate trucks that would otherwise be stacked up along the M20 in Kent. No troops being sent through the Tunnel, no invasion, no defiant and Churchillian act of showing Johnny Foreigner that Dave is jolly serious about these migrant types.

So our free and fearless press is all wind and piss once more. No surprise there, then.
Posted by Tim Fenton at 10:40

I seem to remember that Labour pledged to increase border staff by 1000 - these 'lefties' promising to do something positive whilst the Tories have cut the UK Border Agency to the bone and are now panicking.

Every now and then you stumble across some hapless soul who wonders, "How could the Nazis have gained power in Germany, one of the most advanced nations in Western civilisation?"

All that's necessary is to point them toward Britain's proto-fascist ("right-leaning" my arse) mainstream media, particularly the editorials quoted in this blog. If people cannot see the logical conclusion to this kind of disgusting muck......well, it's obvious where we're headed.

We've already had some neocon nutters urging the use of lethal force in the Mediterranean. Now some utter fucking crackpots want to despatch Gurkha mercenaries to France, presumably to deliver social care......not something you'll find much of in their regimental history.

As Tim rightly points out, the problem is much wider and deeper than a few thousand desperate humans at Calais. It lies in the attitude of the West and its remaining economic colonialism, in capitalism and its never-ending leeching, outright robbery and perpetual warmongering.

It's easy to blame the victims, to stick the boot in on prone street casualties, to baton-charge or water-cannon defenceless human beings. Murdoch and his disgusting gang have been doing the media equivalent for years.

All it needs now is a five metre high concrete wall to go with the razor wire, armed police, fences and attack dogs. Then it will be on a par with what the Israelis are doing to the Palestinian people. Which, come to think of it, is entirely if tragically appropriate.

But none of it is done in my name. Not ever.