The attack on Labour leadership hopeful Andy Burnham by Rupe’s downmarket troops at the Super Soaraway Currant Bun continued over the weekend, with an especially lame “exclusive” - perhaps nobody else was interested - by Sun on Sunday political editor David Wooding, where it was claimed that the MP for Leigh was somehow unfit to lead his party as he did not watch enough TV soap operas. 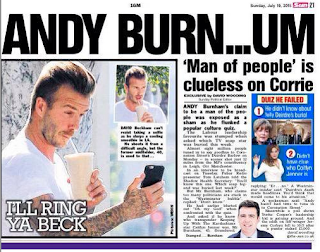 “ANDY BURN … UM” was the not particularly inventive print headline, with readers being told “‘Man of people’ is clueless on Corrie”. Has Burnham ever called himself a “man of the people”? Well, no he hasn’t: that does not discourage the Sun from just making it up anyway, as the paper is not, repeat not, repeat NOT, hell bent on exacting revenge on him for his support of the Hillsborough families.

So what’s the deal? “Andy Burnham’s claim to be a man-of-the-people was exposed as a sham yesterday when he flunked a quiz on popular culture. The wannabe Labour leader was stumped after being asked to identify the TV soap star who was buried this week. Almost eight million people tuned in to say goodbye to Coronation Street’s Deirdre Barlow on Monday – in scenes shot just 12 miles from the MP’s constituency home”.

And, as Jon Stewart might have said, two things here. One, politicians are supposed to deal with real world issues - the Sun would be quick enough to put the boot into those who didn’t. And two, Coronation Street, like DeadEnders and all the rest, is not the draw it once was: when Deirdre and Ken Barlow were married more than 30 years ago, the audience was estimated at 24 million. It’s no longer such a big deal.

Anyhow, back to Wooding: “But he was unable to name her or the hit programme when his claim to just an ordinary guy was put to the test during a radio interview. Mr Burnham, 45, was also left foundering when asked why Caitlyn Jenner was in the news recently. After an embarrassing silence, the interviewer told him the former Olympic athlete Bruce Jenner who has had a sex change”. So how does that disqualify him, exactly?

You’ll love this. “A Westminster insider said: ‘Deirdre Barlow is one of Britain’s best-loved stars and her death made headline news. You’d have thought that something like that which happened in his own back yard would have come to his attention”. “Westminster insider”? Oh just f*** off Wooding, THAT WOULD BE YOU. This is the lamest drivel yet in the lame drivel-fest from the Lame Faculty of the University of Lame.

Riddle me this, David Wooding. Who is the politician most lauded over the years by the Sun? There’s no contest - it has to be Mrs T. Would you like to suggest that she would have known the first thing about Coronation Street - or Caitlyn Jenner? She wouldn’t have had the faintest idea. That didn’t stop the Sun praising her every move, good, bad and indifferent, for well over a decade. This is just a mean-spirited personal attack.

The Sun’s obsessive pursuit of Andy Burnham is starting to get desperate, or perhaps that should read “even more desperate”. Otherwise, why entrust it to David Wooding?
Posted by Tim Fenton at 10:46

"Deirdre Barlow is one of Britain’s best-loved stars" - wrong! Deirdre Barlow was a fictional character, the Sun is, as usual, mixing fact and fiction. Published viewing figures suggest less than 10% of the population cared enough to watch the funeral epsiode, so Burnham seems to be well in the majority.

Not THE David Wooding who didn't know what was happening at the NoTW when he was an editor there:

From BBC: David Wooding described the last few days in the office and praised the paper which had "caged 250 criminals", while he and other staff knew nothing of the phone hacking scandal which saw it shut down after 168 years."

And the one described on the Liverpool "Redandwhitekop" website as:

"I wasn't aware of this specimen till I had the misfortune of hearing him on the radio overnight at the weekend bigging up the early morning shitrags offerings. Claims to have been born in Dingle and a massive LFC fan. Guess who he not only works for, but voluminously sings the virtues of?

Another one who has distinct gaps in his knowledge of what goes on?

And I wonder which one has the more opportune important gaps?

I should have added re David Wooding that unlike Charles Thomson he doesn't appear to warrant a Wikpedis entry. Wonder why that should be?

You know, I'm really beginning to warm to Andy Burnham.

First, he rogers the Murdoch skinheads over Hillsborough.

Now he knows fuck all about soap operas.

The boy might have something about him after all.

If that's the best the Sun can throw at him he's home and dry already.

I'd have been surprised had he not known that Anne Kirkbride had died. That was all over the papers and the news bulletins as opposed to being buried in columns called Soap Suds or the like. I should get myself a time machine and ask the question of him when she died SEVEN MONTHS AGO.

It's a common trick by tabloid reporters, particularly for incoming ministers of sport or culture. Never mind the strategy they may have to encourage grassroots participation, or to host a major international event - all that matters is that they know who scored the goal.