The suspicion of many observers that Young Dave and his jolly good chaps knew that Network Rail (NR) could not complete the network upgrades promised in the run-up to the General Election was, at the time, no more than that. But that NR - like BR before it - could reasonably manage one large project at a time became clear after the event. Now the beans have been well and truly spilled: the Tories knew all along. 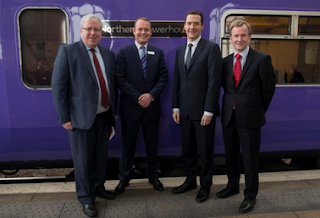 What was promised before the polls included the electrification of the Midland Main Line from Bedford to Sheffield - a route which takes in a number of marginal constituencies, such as Corby and East Northamptonshire, won by the Tories in 2010 but regained by Labour after Louise Mensch threw in the towel and left for the USA. The prospect of a direct electric service to London may have proved attractive to swing voters.

And so it came to pass that Labour incumbent Andy Sawford lost the seat he had won in that by-election. The promise of better rail links to the capital may also have proved beneficial to Anna Soubry in Broxtowe, to the west of Nottingham, Nigel Mills in Amber Valley, Amanda Solloway in Derby North, Maggie Throup in Erewash, Nicky Morgan in Loughborough, and Mark Spencer in Sherwood.

That’s seven seats. The Tories’ overall majority is 12. Had Labour taken all of those, there would have been a hung parliament. There was also the promise of electrification for the main northern Trans-Pennine route from Manchester to Huddersfield, Leeds and York, which may also have benefited the Tories. This is doubly important, because we now know that the outgoing Coalition Government knew there would be delays.

The BBC has reported “Ministers were warned before the election that major rail upgrades might have to be delayed … Network Rail boss Mark Carne said the Department for Transport was told in March that decisions about deferring schemes could be due within months. The department had previously said it was not told Network Rail's board expected delays until after the election”. Someone is being economical with the actualité here.

Carne wrote to Labour’s Lilian Greenwood to tell “In mid-March 2015, Network Rail informed DfT that decisions may need to be made in the coming months about the deferral of certain schemes”. He also told that “Network Rail, the DfT and the Office of Rail Regulation all knew around 80% of current projects were ‘at an extremely early stage of development, with inevitably high levels of uncertainty regarding their cost’”.

Instead of coming clean, the Tories carried on with the pretence, their press pals happy to see the Rt Hon Gideon George Oliver Osborne, heir to the seventeenth Baronet, unveil a stick-on nameplate applied to a 25 year old train as proof that all was well. Now, those same press pals are keeping schtum (the Guardian has reported the story, though) because there is the possibility some seats have been won on a blatantly false premise.

Not that Cameron and Osborne will be fussed. They won. That’s all that matters to them.
Posted by Tim Fenton at 10:40

I have yet to meet anyone sensible who ever believed that "Northern Powerhouse" bollocks. Even when it was pointed out to them that noticeably missing from the lying tripe of an improved cross country rail link was......the North East and Merseyside. By coincidence of course both of these areas hate the tories with a purple vengeance and have been deliberately isolated economically and by mainstream media. Sheffield was only included reluctantly because they couldn't avoid the geography.

So yes, of course the tories KNEW. They lied in their teeth as they always do.

Osborne sums them up. Even by tory Bullingdon "standards" I have yet to see a more thuggish, dead-faced, insensitive, selfish, anti-democratic, ex public school Suit. All of these behavioural traits are required for the kind of "property developer" he is. The same goes for the rest of them. Liars, thieves and bullshitters the lot of them, no exceptions. They'd sell their own mothers to make a few pounds.

By the time the next election rolls around they will have destroyed what's left of decency in political life in this country. And don't expect any opposition worth the name by New Labour - they're just as bad.

It was always a crock. Blatant electioneering but some voters still fall for it.
As a northerner by birth who has lived near London for many years, take it from me, this is the most London centric government ever. Anything outside Westminster and the square mile is of no interest to them.

Ask Cornish voters about pre-election promises for a 'stadium for Cornwall' and what has happened since.