After the BBC announced that long-serving political editor Nick Robinson was to join the Radio 4 Today programme, the speculation began as to who might replace him. Since the appointment to the post of John Cole back in the early 80s, the post holder has become a fixture of TV news bulletins, a nationally-known figure. It is arguably the highest-profile role for a journalist anywhere in the UK, and perhaps beyond. 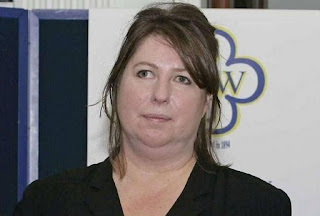 Jan Moir: such a happy soul

There was also speculation that the selection process would see the appointment of the first woman BBC political editor, and so it came to pass as Laura Kuenssberg was given the nod earlier this week. Much of the reporting of this event has been purely factual (Press Gazette account HERE), but then the Guardian told “The BBC was said to be keen to appoint a woman to the role to give its political coverage more gender balance”.

Now, that is not the same thing as making the selection on gender alone, but it was all that the inmates of Northcliffe House needed to use the event as yet another excuse to put the boot in on the hated Beeb. It is no coincidence that the duty of confecting the hatchet job was given to Glenda Cattia Maxima Jan Moir, who preceded her rant with the routinely dishonest headline “Laura's a star but why did the Beeb only want a woman?”

There was more. Rather a lot more: “from the moment the plum vacancy was announced, BBC bosses made it clear that they wanted a woman for the job to give the Corporation’s political coverage more gender balance. A lady person! Crack open the Babycham and the cal-free snacks. For a mere girl in the top job would be cutting edge and groovy and inclusive, not to mention super-modern and make them look really, really great”.

Not, you understand, that the Mail is being demeaning or sexist - how can it, when it’s given the job of kicking the BBC to a woman? But having made her false assertion, Ms Moir was off and running: “Isn’t making it clear that female candidates will be favoured not unlawful discrimination by any other name? Positive discrimination is just as sexist as the negative sort and anyway, there is nothing positive about it if you’re a bloke”.

Sadly, as Captain Blackadder might have observed, there was only one thing wrong with this idea - it was bollocks. Nothing was made clear. There is no evidence that any male candidate was passed over, which Ms Moir almost admits: “Boo hoo to all the other hard-working and now slightly disillusioned chaps who might have fancied their chances at the top job but understood that Men Need Not Apply was the tacit message”.

Then she lets slip the real reason for the kicking: “it has been particularly galling to see BBC executives and certain newspapers crowing about the first female political editor of the BBC”. Pay attention all you yogurt knitters at King’s Place - it’s the Guardian’s fault. Listen up: “These things are not supposed to matter … To do so is demeaning to Laura Kuenssberg and to all of us”. It’s not the Mail demeaning women, so there.

Not as demeaning as peddling a pack of lies as fact, but hey ho. No change there, then.
Posted by Tim Fenton at 13:10

It was David Steele who said of the loathed Thatcher, "I don't mind being governed by a woman. It's THAT woman I mind."

Which, to put it mildly, was fair enough.

Keunssberg?....Couldn't give a shit, actually. She's just another narcissistic ex-Murdoch information clerk. With weird twitches and a peculiar mouth. I wouldn't trust her to turn a page, let alone believe a word of her "reports."

Not sure where that came from as most of her working life appears to have been at the BBC alternating with ITV and Channel 4.

As for Jan Moir's "Positive discrimination is just as sexist as the negative sort and anyway, there is nothing positive about it if you’re a bloke”

Not sure I, as a blokeish bloke, would agree with that. Sometimes a good bit of positive discrimination can lead to much needed change. The record of the Beeb and the various sex scandals emanating forth recently shows that something was needed - perhaps a lot earlier than now.

Re prev comment: Keunssberg?..... She's just another narcissistic ex-Murdoch information clerk.
Laura Kuenssberg joined BBC in 2000 as a trainee and has worked only on terrestial TV. Don't get the Murdoch link?

I am of the opinion that if we are obliged to listen to the utter cod's the beeb trots out then perhaps she would be easier on the eye than Nick..

But then again cat yak would be easier still!

One of the 'Anonymous' posters on here appears to be a rather bitter and cliched Spart, convinced that everyone not sufficiently left is the bastard lovechild of Murdoch and Ayn Rand.