And so the Rt Hon Gideon George Oliver Osborne, heir to the Seventeenth Baronet, stood at the Dispatch Box yesterday and delivered to the Commons his first genuinely Tory budget. All manner of measures had been trailed - Hugh Dalton would not have had a problem with his loose tongue nowadays - but when it was all spelled out, somewhere in the bowels of Northcliffe House, the spin machine was being fired up. 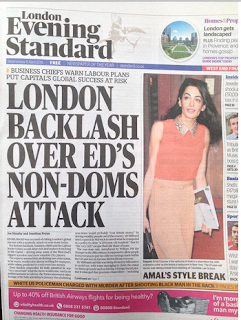 Not, you understand, that this is the Daily Mail I’m talking about here, but the Evening Standard, which, in concert with all fearful right-leaning papers, spent much of the General Election campaign frightening the readers with apocalyptic tales of how Mil The Younger, supported by “Auguste” Balls and their henchmen, would, if elected, wreak havoc on the country by, er, abolishing the Non Dom rule.

Now, Standard head man Evgeny Lebedev has never let slip whether he benefited from the Non Dom rule, an arcane hangover from days when Brits living here did business and paid their taxes in foreign jurisdictions, but the Standard’s headline after Miliband announced that Labour would scrap the privilege gave a none-too-subtle clue. 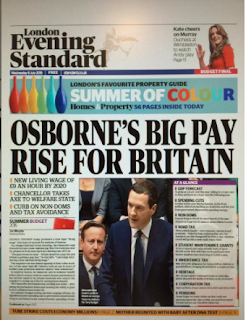 How big a pay rise is that, then?

“Business chiefs warn Labour plans put capital’s global success at risk … LONDON BACKLASH OVER ED’S NON-DOMS ATTACK”. As Sir Sean nearly said, I think we got the point. Removal of non-dom status would be Bad For Britain, because it would be Bad For London. I mean, what if the owners of One Hyde Park had to open their wallets a little wider? Evgeny would find himself at some pretty grouchy dinner parties if that happened.

Note also the lead name on the by-line: Joe Murphy. He’s in demand at the Standard, for instance to write up yesterday’s Budget. So what did he have to say? “OSBORNE’S BIG PAY RISE FOR BRITAIN … New living wage of £9 an hour by 2020 … Chancellor takes axe to welfare state … Curb on non-doms and tax avoidance [my emphasis]”. Effectively, the non-dom rule is being abolished. But slowly. So that’s all right, then. 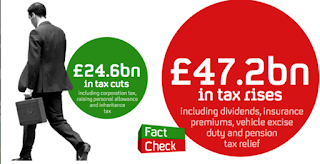 Er, not a pay rise at all, actually

That’s a blatant example of Tory-cheerleader hypocrisy. But it gets worse: the idea that there has been a “Big pay rise for Britain”, when the actual tax numbers are added up, is clearly bunk. As Channel 4 Fact Check has shown, while Osborne’s proposals include tax cuts of £24.6 billion, that figure is put in the shade by tax rises of £47.2 billion - almost twice as much. Otherwise, how could Osborne hope to reduce the deficit?

Those tax rises include removal of pension tax relief for the very well-off - another of those moves that, had Labour enacted it, would have had the Standard frothing and ranting. But because it’s the Tories, they just have to sit there and smile. So that’s plenty of gritted teeth in Kensington then, to go with the rank hypocrisy and very selective reading of the budget.

And you wondered why the Standard is given away for free? Wonder no more.
Posted by Tim Fenton at 10:56

I don't know who's more deluded by that bullshit, the poor gimps who knuckle their foreheads and bow the knee or the MBA-waving dipshits churned out by the colleges and unis.

Any group of people who actually vote for Bullingdon Bozo de Pfeffel deserve all the Rupert Murdochs, Kelvin Mackenzies, Suns and Daily Mails they get.

Sooner or later the whole rotten house of cards will collapse on itself.

"Responding to Labour’s plans to raise the minimum wage to £8 per hour by the end of the next parliament, Simon Walker, Director General of the Institute Of Directors, emphasised that the vast majority of IoD members already pay the higher ‘Living Wage’, but stressed that decisions on the minimum wage must be taken by the independent Low Pay Commission"

"Businesses were largely positive about the move, said Simon Walker, director general at the Institute of Directors.

"We should not understate the boldness of this move, and many businesses will have been taken by surprise, but the IoD accepts that after several years of slow wage rises, now is the time for companies to increase pay."

A bold Prime Minister was thinking one day
'bout his bankers who were still holding sway
He thought what's the point of running this ship
If I can't get an increase in pay
Those zero contracts are all very fine
But they won't do, for me and all that is mine
So he spoke to his Chancellor and told him to act
Make the plebians pay and rearrange all the facts

Cuts, cuts, glorious cuts,
Nothing quite like it, no ifs and buts.
So follow George, follow, down to no morrow
And there let us swallow his glorious cuts