Yesterday evening, there was a debate on the subject of press freedom, where former DPP Keir Starmer and Murdoch enforcer Trevor Kavanagh were among the participants. Kavanagh, the journalistic equivalent of “Mad” Frankie Fraser, an unyielding, unapologetic and utterly unprincipled thug, railed long and loud at Starmer for what he erroneously claimed were politically motivated prosecutions of journalists. 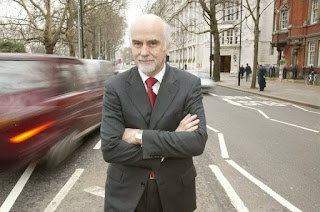 Kavanagh: Rather nastier than he looks

Those prosecutions, he claimed, were a Labour hit-job: as Ivor Gaber Tweeted, “says Operation Elveden was political vendetta as result of Sun withdrawing support from Gordon Brown”. Kavanagh would know all about vendettas: he has been carrying on a number of them, on behalf of Godfather Murdoch, for many years. And what he was not telling Starmer, or the audience, was that this was a pre-planned hit.

It was so premeditated, in fact, that even while the debate was going on, the Sun’s deputy political editor Steve Hawkes had an article published on the piss-poor Sun Nation website titled “KEIR HYPOCRISY! U-TURN ON PROSECUTION OF JOURNALISTS”, which went on to tell readers that “Britain’s former chief prosecutor was accused of breathtaking hypocrisy yesterday after making a huge U-turn on legal action against journalists”. 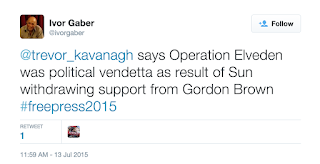 It got worse - and more desperate: “In comments immediately seen as a desperate move to save his career, Labour MP Sir Keir Starmer QC said there should be a new ‘public interest’ defence as the current rules in place were not strong enough”. Or, as the Sun is not going to tell readers, the kind of provisions laid out in the Leveson report. And the DPP has to work with the law as it is, so there is no “U-turn” involved.

That the proverbial kitchen sink is being thrown at Starmer is also evident as the trial of Neil “Wolfman” Wallis, who was so utterly inept that he somehow remained blissfully unaware of the phone hacking that everyone else in the Screws office knew about, is cited, although Starmer was not the DPP when the decision was taken to charge him. And one fact is, all the time, being brushed under the carpet here. 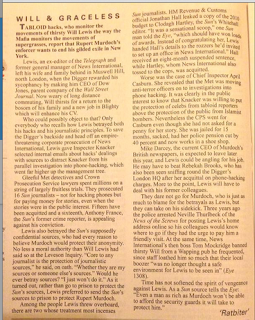 That fact, as Private Eye magazine pointed out in some detail recently, was that Operation Elveden would never have happened, had the Murdoch empire not shopped its own hacks to the Police. Moreover, while the Sun’s boot boys repeat their “no prosecutions” mantra, that only applies to their fellow hacks. Many of their sources were betrayed, went to jail, and lost their jobs. Yet we are now expected to believe it was all someone else’s fault.

On top of all that, what Kavanagh also fails to tell is that, even when the Murdoch press was supposedly supporting Labour, the Screws was hacking the phones of that party’s MPs, all the way up to deputy PM John Prescott. That’s an interesting kind of support being shown there, eh Kav? Now, Creepy Uncle Rupe’s enforcer is doing the rounds telling anyone and everyone to “look over there” at Keir Starmer.

I’d call Kavanagh, Newton Dunn, Hawkes, Abell, Sharpe and the rest a shower of shit, but that would be unfair to all the genuine showers of shit. They are the lowest of the low.
Posted by Tim Fenton at 10:44

And what were our intelligence gathering agencies (and The Met) doing while Cabinet Ministers were hacked (not forgetting the, as far as we know, ongoing VIP paedophile network as reported by ExaroNews).

It was made quite clear at The Leveson Inquiry that senior officers of the Met and secret services had close relationships with those editors and executives who apparently came from Barcelona with Fawlty understanding of what their own business operatives were doing. So I would guess that they know nothing at all about those "secret dossiers" that were allegedly held in the NewsCorp safe room too?

One can only surmise, given a lot of evidence has been "mislaid", diplomatically speaking, that there is a tremendous rearguard action being fought out behind the scenes to try and avoid too many more "unfortunate and embarassing" secrets coming out.

And attack can be thought as the best means of defence, although if it doesn't work it could prove even messier to clear up e.g. phonehacking, Stephen Lawrence & Daniel Morgan murders. James Murdoch may need a bigger box to clear this particular swamp.

Who to trust that will clean the mess up? Or do we allow it all to be swept under the carpet or into the long grass again?

I intend to pull up a chair, sit down, and enjoy the spectacle of Kavanagh loosening his false teeth over this. And losing circulation.

It looks promising. He's already dribbling from the mouth.

Finally the Murdoch thugs are being called out after years of kicking prone street victims into unconsciousness.

In passing, it's worth noting Rupe and his cockney skinheads even turned on Bullingdon Div and co after they re-established the Hillsborough Inquest and formed the Leveson Inquiry.

But of course even the tories could hardly ignore the mountain of evidence in both, though they - like New Labour - had squirmed away from it for thirty years beforehand. In fact they only moved when it became impossible to evade action.

Every time I see the Murdochs, Kavanagh and their employees and apologists I feel an urgent need to take a shower. The sooner we're rid of the lot of them the better.