If anyone had any doubts as to whether the New Statesman magazine was of truly independent outlook, or just another part of the press establishment, this week has confirmed that, well, establishment it is, as its increasingly out of touch editor Jason Cowley has sucked up to the inmates of the Northcliffe House bunker, and the mag has effectively approved the bullying tactics employed by the Murdoch press. 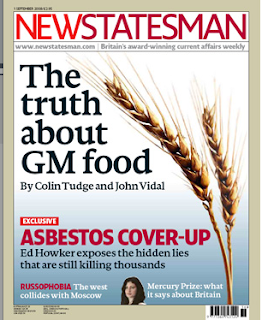 Gone a bit downhill since then, sadly

And, as for the idea that the Staggers is in any way sympathetic to any left of centre political ideas, that thought has been signally disabused by Cowley swallowing the right-wing Kool-Aid in one as he refers to a Trade Union leader as a “red baron” in the Mail today. He doubles down by saying of Andy Burnham “this Cambridge-educated former special adviser likes to think of himself as the People’s Andy”.

Yes, the same right-wing drivel - don’t look at the comprehensive education and the achievement of going up to Cambridge, but play the “elitist” smear - that the perpetually thirsty Paul Staines and his rabble at the Guido Fawkes blog regularly peddle. And things are no different in the Staggers’ own features, as witness a piece by Tom Latchem, which also looks at Burnham - and the Sun’s petulant bullying of him.

There is more: “As a former tabloid journalist myself, and one who remains heavily involved in that world, I told him in no uncertain terms that staying on the right side of the Sun is crucial if you are to have any chance of political success”. So heavily involved that part of that interview Burnham gave Latchem managed to find its way to the Sun’s Sunday political editor David Wooding - it was used to give Burnham another kicking.

So the article’s conclusion will come as no surprise: “unless Burnham can navigate an acceptable compromise with the Hillsborough families he is deeply loyal to and the Sun, his messages about championing the NHS and delivering a fairer austerity plan may never get a fair hearing in Britain’s biggest newspaper”. For Latchem, selling one’s soul is clearly a straightforward exercise, as is yielding to the bullies.

No-one should be surprised that there is such cynicism surrounding politics when anyone giving the impression of having principles is deemed fair game for the deeply unpleasant convocation of thugs, bullies, yah-boo boys, shameless opportunists, amateur Mafiosi, and other associated shysters that populate the Murdoch empire. It tells you all you need to know about the press establishment that this behaviour is deemed acceptable.

And now we can see that the Staggers is part of that establishment. How very cosy.
Posted by Tim Fenton at 13:13

Time for an Alan B'stard resurrection? As if he and his clones never went away.

On the contrary, if Burnham summons the courage to make outright attacks on Murdoch and the Scum he'll have set a new precedent for decency in the face of extreme right-wing tenth-rate tabloid lies. He won't of course.

There comes a time in every culture and society when men of principle have to stand up and say Enough is Enough, and let the chips fall where they may. My bet is that Burnham doesn't have that in him. He's New Labour: therefore, when it comes to the crunch he backs off - as in, for example, failing to make full frontal attacks on the PFI scam. Right wing New Labour has never held any principles worth the term, which is why Scotland fled them in droves and why it will happen in England too.

He'd do well to consult the words of John Adams during the Amistad trial. Adams said then that if a Civil War was brought on because of slavery...then so be it.

I have just watched wretched Polly Toynbee on BBC TV News make the most disgusting and traitorous attack on Jeremy Corbyn, a woman right-wing corrupt even by New Labour "standards." If Burnham wants somebody like that behind him he's best wearing a kevlar jacket - a knife between the shoulder blades is merely a matter of time.

Perhaps it's time some leading Labour politician stood up and said, "Fuck Murdoch, his propagandists and New Labour. There's no difference between them all." The same thing could be said about Toynbee too.

As for the New Statesman, it's become history's bad joke on journalism. Nothing but a shitehawk sheet. Not worth a carrot. Full of sandal-wearing propagandists with the morals of a caged rat.