Here on Zelo Street, we’ve seen some embarrassing moments from the development of the Free Schools programme: schools having to up sticks and move out of town, head teachers departing at short notice, schools either closing, or, more often, being forcibly closed, costs spiralling out of control, appallingly bad staff retention, and of course the occasional instance of allegedly criminal behaviour. 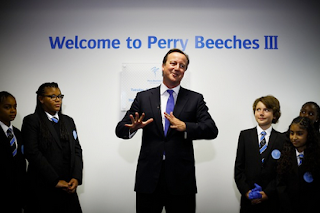 Michael “Oiky” Gove’s magic bullet for England’s education system has been the source of much excellent entertainment. And it is the gift that keeps on giving, as the Tories have experienced a yet more serious embarrassment: a Free School set up under the watchful eye of a so-called “Superhead”, and given Young Dave’s personal seal of approval on its opening, had been put in special measures by Ofsted.

The Birmingham Mail has spelt out the grim reality: “Perry Beeches III plunged into special measures after Ofsted criticises leaders and brands teaching ‘dull' … Damning report into free school opened by David Cameron sparks four resignations and an apology to parents from 'superhead' Liam Nolan … Lead inspector Denah Jones said: ‘It fails to engage students, who become bored and start to fidget because they do not have enough to do or work that makes them think harder’”. Would Nolan care to comment? “I’m a real believer in accountability and I believe people should be watching what I am doing and keeping us in check … But I believe Ofsted has got it fundamentally wrong. How can we be special measures when we are applying exactly the same model of teaching and running a school at Perry Beeches III as we are at the ‘outstanding’ academy and Perry Beeches II?” That’s for you to answer, matey. 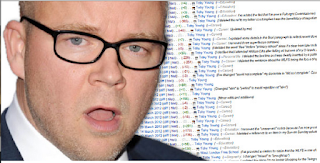 Liam Nolan contributed to a Gove-era Government press release titled “Parents flock to Free Schools”, telling “At all the Perry Beeches schools we offer a broad, balanced and dynamic curriculum to the local community. We were thrilled to have received almost 5 applications for each of our places this year”. So dynamic it’s “dull”, eh?

Nolan also appeared in an enthusiastic Economist piece to let the interviewer know “he favours ‘close-knit families of schools’ in geographically close areas, where staff can be swapped around or moved to more senior jobs within the group. Mr Nolan thinks success is achieved by ‘spreading an ethos as well as technical teaching tips’”.

And Tobes headed another of his Free School puff pieces with a photo of Cameron at the opening of Perry Beeches III. Today he’s blethering about the Tube strike and otherwise keeping his head down. Meanwhile the Free Schools programme is further over budget than it was before. And “before” was £1 billion over budget.
Posted by Tim Fenton at 16:53

You are right to draw attention to this.
However, yet another failed free school won't make the slightest difference to the Tory narrative.
Education policy , like so much else, is about ideology; nothing to do with evidence.

Have you noticed the latest load of pr advice bollocks?

That is, if you have a two button jacket always leave the bottom button undone. It shows off your....well, your bollocks, actually. Plus it's "dynamic."

Of course it all started with twat face Blair and his gang, and the other neocons just copied it.

But it's a real problem for rolls of lard like Eric Pickles and Bullingdon Bozo de Pfeffel.

Sorry Anonymous but I started as a trainee tailors cutter in Bethnal Green in 1953. A two button gents jacket was cut so that the lower button was left undone and on a three button jacket only the centre button was fastened. Everybody in the trade knew this and that is how jackets were worn. I still think jackets look better like that.

What's the point of a jacket with two buttons if you deliberately don't use the bottom button.

Dear Anonymous,
Dear Anonymous,
You will have to speak up I can hardly understand what you are saying but I suspect it is rude :-) I think that if all the buttons on a jacket are fastened the wearer looks more like a sack of spuds. I should also mention that the bottom button of a waistcoat is also left unfastened. Tony Blair didn't start that trend either.

Deltarosee, I bet you didn't last long in the rag trade if that's your best reasoning.

If a made-to-measure suit looks like a sack of spuds it's the fault of the "tailor."

And I blame Blair because he's a tory and a war criminal.

These schools and their internal practices should be watched and scrutinised with great care. All is not what it seems.