Karen Danczuk - Bang Out Of Order

As if the car crash reality show that is the Danczuks could not get yet more grotesque, readers of the Super Soaraway Currant Bun have been treated to an “Exclusive” this morning screaming “Danczuk Blow [geddit?!?] … Fitness hunk stays night with Selfie Queen Karen … BUSTED!” where it is revealed that those entering and leaving Ms Danczuk’s Rochdale home have been under purely coincidental surveillance. 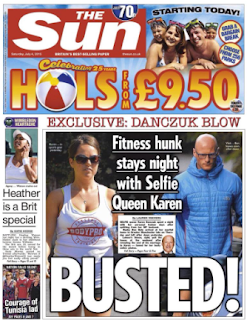 And, such is the appetite of Rupe’s downmarket troops to put their prurient hackery before a wider audience that the accompanying article has been made free to view. It makes for utterly unappealing reading: as nominally Labour MP Simon Danczuk - whom the Sun has now demoted from “leading” or “campaigning” to mere “backbencher” - was looking after the couple’s two young children, Kazza was entertaining her personal trainer. 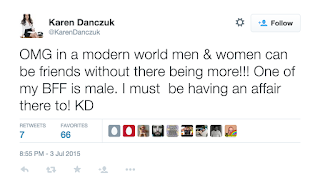 “KAREN Danczuk spent more than seven hours with her personal trainer as he stayed the night at her house … Athletic Ben Bate sneaked into the 31-year-old’s marital home late on Thursday — just five days after she split with husband Simon, a Labour MP … Ben, who last night revealed he had separated from his wife, did not leave until shortly after sunrise yesterday, when he walked to his parked car with his hood up”.

You almost feel sorry for him

Leaving the rest of the lamentably constructed copy aside - it’s the same kind of puerile nudge-nudgery that the Sun has been peddling for decades - the obvious question begs itself. Where is the public interest in this lurid peep show? Bate and his apparently estranged wife also have children - does this not matter to the Sun? And isn’t it glaringly obvious that this is a calculated and very deliberate set-up? 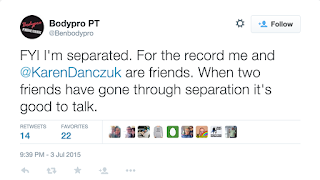 Tell the Sun that - if they'll listen

Karen Danczuk has shown very little surprise at the appearance of the Sun splash. Why this might be is not difficult to deduce: her agent is Borne Media, set up by the daughter of one Max Clifford, serial sex offender with whom the Murdoch press was so happy to do business for so many years. Had the snapper outside the Danczuk house not been there with her approval, Kazza would more than likely have complained to the Police. 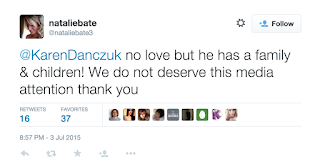 Someone else who wasn't told about the publicity

It’s clear from the reaction of Bate’s wife Natalie that the publicity is not welcome. No such comment has come from Ms Danczuk, just the obligatory attempt to pretend that she is still a devoted and protecting parent - just the kind of thing a PR might prompt her to do. Meanwhile, someone else’s family - that would be someone not getting paid, nor provided with a PR - is having their life trashed for the gratification of the Sun’s leering hacks.

One has to wonder who is the biggest villain here - Kazza for doing what she’s done (while, seemingly, having it all snapped), or the dregs of journalism for using the whole sorry business to flog a few more papers. Make no mistake, Karen Danczuk is nothing more than a a vacuous and deluded wannabe, and were it not for the Murdoch press pandering to her and her PR, she would by now have vanished without trace.

The Sun keeps returning to the Z-listers - like a dog to its vomit. No change there, then.
Posted by Tim Fenton at 10:47

With the emotional baggage she seems to be carrying, I feel sorry for him.

You can expect it to get worse.

Murdoch's boot boys are still steaming with hatred for being exposed for the gang of Soho scumbags they are. So they'll take it out on anybody.

It really is as basic as that.

Think its time to move on Tim, your blog can do better than stories about nobodies like this.
There are interesting political and social times ahead, far better to concentate on that. (The recent IDS article for example)

She's broken cover. Mailspeak for taking her children to the cinema.